Album Review: Anton Barbeau — Oh The Joys We Live For 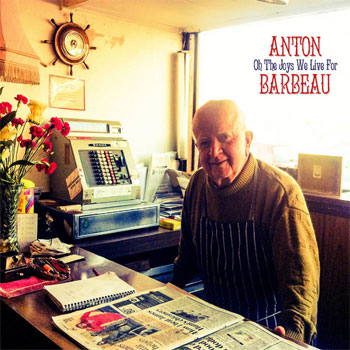 Over the course of his career, Anton Barbeau has confounded those who would pigeonhole him. But there is a consistency of creative vision that connects his varied works. Whether as a solo artist or with a band, his music expresses his unique, singular (and sometimes idiosyncratic) musical worldview and perspective. His latest release, Oh the Joys We Live For is, by Barbeau’s standard, a pop record. While the opening title track begins with a vocoder phrase, it immediately shifts gear into a sort of singalong tune.

And while “Cowbell Camembert” sports a weird title, the song is a straightforward, snaky rock-pop tune. In the hands of a lesser artist, the tune’s synthesized percussion and handclaps could seem cheap, an easy way out. Here, instead, they sound and feel like the result of a well thought-out production/arrangement decision.

Like most of the album, that tune is all Ant, all the time. Guests do pop up here and there (primarily Sharron Kraus and Bryan Poole) but a limited credits list is to be expected in the era of youknowwhat-19. There’s a folk-rock vibe to songs like “One of Her Super Powers,” but Barbeau’s facility with a melody means that the song rises above genre. That song’s chiming 12-string solo is a delight.

The production values are high, but that’s pretty much a given from this prolific artist. And the album is varied in its own way: his aptly-titled “Filmik” does indeed sound like the theme to some sophisticated German cinematic endeavor. It’s quite different from his krautrock and new wave (Neu! wave?) excursions, but it does hint at yet another direction he might decide to pursue in the future.

“When Life Brings You Beer” has it both ways: the melody is conventional and highly appealing, while the lyrics is strange. And the song’s just-plain-odd instrumental break combines wackiness and accessibility into a seamless whole. It’s song like this that cause Anton Barbeau to be mentioned in the same breath as artists like Robyn Hitchcock.

Banjo, stacked backing vocals and a hypnotic bass line adorn the lively “I Love it When She Does the Dishes.” On “It’s Alright rosie,” Barbeau crafts what sounds like his take on late-sixties folky freakbeat, with percussion that evokes thoughts of early Tyrannosaurus Rex. The haunting chamber pop of “Three Days the Death Enigma” is Barbeau at his most sweepingly dramatic.

The saxophone that crops up on “Die Smiling” is a welcome surprise. And the initial demo vibe of “Salt Lick” gives way to a delightfully off-kilter guitar solo. The album ends as it began, with a winning pop melody. “I Been think ‘Bout you” showcases Barbeau’s ability to write a memorable pop tune, and his delightfully perverse need to up-end convention by inserting flaky elements into the song. For those who like their pop with character, such an approach is more than welcome. And Oh the Joys we Live For is another winner.