Album Review: Greg Antista and the Lonely Streets — Under the Neon Heat 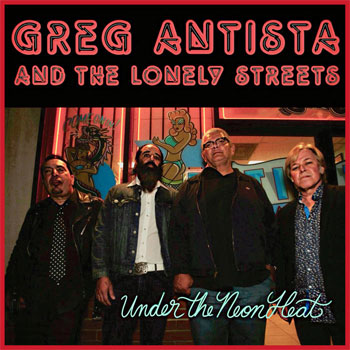 When we last checked in with this South California rock quartet about two years ago, they had released their debut album, Shake, Stomp and Stumble. As I wrote at the time, that record featured “concise, taut songs played with verve and conviction.” Two years and a world pandemic later, one thing has changed: guitarist Jessica Kaczmarek is gone, her place taken by new (new to the group, that is) guitarist Frank Agnew.

Beyond that, I’m pleased to report than the virtues that made the band’s debut so successful are firmly in place on Under the Neon Heat. The songs have the sort of melodic roar one finds on Smithereens and Cheap Trick records. There’s a vaguely Americana sensibility – something about this outfit reminds me of The Blasters – but they deliver it without a bit of twang.

I don’t know if Greg Antista has actually spent two week in a ‘Tijuana Jail,” but his musical tale of that name is a musical trip worth taking. Antista’s vocals have just the right amount of lived-in character, and he writes songs that leverage his vocal texture. This is music that earns vigorous head nodding and unabashed air guitar and -drum playing by listeners. It’s fun, cocksure in a friendly way, and – again, as I said last time around – brought to you with “nary an ounce of artifice or bullshit.”

Recommended. And it’s available on vinyl, as all good music should be.