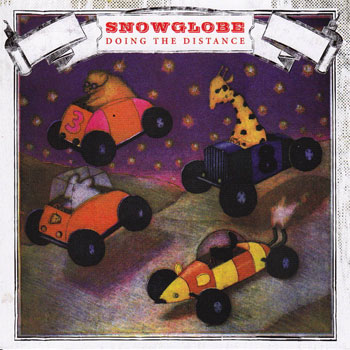 Doing the Distance is full of surprises, especially for listeners who approach it without preconceived notions. After a brief, brass-centric intro (“Theme Music,”) the group shifts into what initially sounds like a kind of Wilco-influenced country rock. But those horns pop back into the mix, alerting the listener that perhaps Snowglobe has a wider musical vision. And then when those keening cellos break through, you begin to suspect that things are gonna get weird.

But wait: a few seconds more, and the song settles into its groove, a tuneful pop/rock/alt-country mix. Okay, so that’s what this album is about, with a nice if conventional lead guitar break? Nope! That second tune, “Loaded Gun” runs just over two and a half minutes, and slides smoothly into the brief “Comforted,” which has more in common with Magical Mystery Tour crossed with some Olivia Tremor Control.

You get the idea, I hope. Doing the Distance isn’t a collection of songs as much as it is a fully-formed cohesive work. The songs don’t tumble into one another; there’s careful planning at work here. The tunes hang together, each one logically following the next. “Ms. June” is astounding, a folky pop tune that may well conjure thoughts of Preservation-era Kinks: a strong melody, an acoustic-and-brass core, and yet it rocks. Its stinging lead guitar work is from the Neil Young and Crazy Horse school, yet it’s so brief that it avoids self-indulgence.

Sure, it’s idiosyncratic. Unless you’re somehow well-acquainted with the individual songs on Doing the Distance, you won’t know when one tune ends and the next begins; you’ll gain a sense after a song is underway. And that’s fine: this album – made in 2005 – is very much of the “listen to it all the way through” school, which makes its new availability on vinyl especially welcome.

The hazy, laid-back vocal work may not be to every listener’s taste. But it’s worth noting that the guys in Snowglobe are better singers than, say, Wayne Coyne. And he’s done just fine. So even if the singing on Doing the Distance doesn’t initially grab you, you’d be well advised to give the record time to win you over.

This is one intimate record. The production values are top-notch, but there’s something about the way it was recorded that gives it a you-are-there feel, that the drawing-room piano is mere feet away from you. And highlights abound: “Master of Forgotten Works” is such a gem, with a delightfully cluttered arrangement in which brass and twiddly-knob synths engage in crosstalk while the core guitar/bass/drums parts move a catchy, infectious melody forward. Think of it a sort of cousin to OTC’s “Jumping Fences” in that its irresistible melody is over far too soon. The good news is that there are even more wonders to behold, so let the record keep spinning.

The songs and arrangements are nicely varied, but there’s a unity of purpose that serves as a sonic glue, holding the thing together and making the whole greater than the sum of the (already impressive) individual pieces. The impressionistic, atmospheric linking tracks have their charms, but it’s the song-y tunes like “Changes” – a tune that answers the question, “What would Flaming Lips sound like if they leaned slightly in a country direction?” – in which Snowglobe truly excels.

Plenty of those Elephant 6 bands – and their like-minded fellow travelers – have attempted to make a Pet Sounds Redux or a Son of Sgt. Pepper with varying degrees of success. Doing the Distance may not quite scale those heights in the ears of today’s listener, but if you dig those and you have a mind that’s open to indie rethinks of those grand designs, this is an album you need to hear. And hear more than once.

You May Also Enjoy: my review of the vinyl reissue of Snowglobe’s 2002 album, Our Land Brains.