When touring musicians were forced off the road in March 2020 by the COVID-19 pandemic, few thought the disruption would last more than a few months. More than 16 months later, life is only incrementally returning to something approximating normal. Ending an extended period during which its stage has gone dark, the San Jose Civic hosted Bay Area blues-rock guitarist Joe Bonamassa on July 30.

Bonamassa has an extensive album catalog; not even counting collaborative projects, the New York-born guitarist has released 15 studio albums since his debut, 2000’s A New Day Yesterday. His most recent studio album, 2020’s Royal Tea top-tenned the charts in five countries. Yet as well-received as those records have been, Bonamassa’s reputation has been built and cultivated on the strength of his live performances. 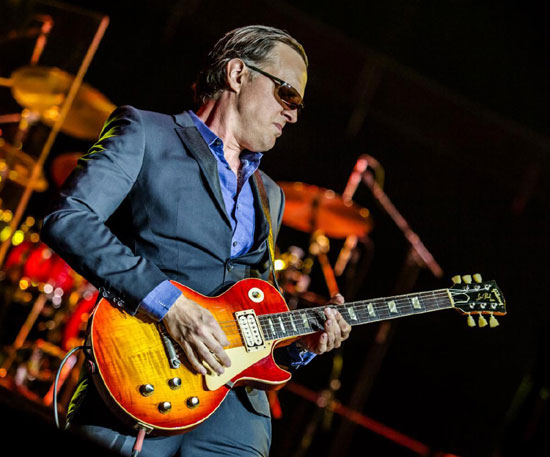 His steady stream of live albums – 18 and counting – splits the difference. Released in June, Bonamassa’s Now Serving: Royal Tea Live from the Ryman serves up an exciting and varied onstage performance for listeners who miss the concert experience. And the musician’s plethora of live releases underscores an important quality of his music: it’s always changing. With live and studio albums, “You’re serving two different masters,” Bonamassa says.

“Obviously, you don’t want to make a studio record that’s full of eight-minute jams and meandering solos,” Bonamassa says. Then he pauses and adds with a chuckle, “Obviously, you don’t want to do a live show like that, either.” He characterizes live performance as “a conversation among the musicians, based on a conversation with the crowd.” That real-time interactivity feeds the creative expression – and fulfillment – of everyone involved, on stage and off.

Of course Bonamassa was sidelined by widespread venue closures just like most every other musician worldwide. Asked how he spent his time through the second half of 2020 and the early months of this year, he laughs heartily. “Not playing guitar, I can tell you that!” he says. Yet he stayed quite busy, hosting his Live from Nerdville podcast. He’s hosted more than 60 episodes of the show, and its simple format – conversations with fellow musicians – is a winning one. Bonamassa has welcomed notables from the blues idiom; Selwyn Birchwood, Fantastic Negrito and Alligator Records founder Bruce Iglauer have all been recent guests.

But as is the case with his own music, Bonamassa looks beyond the blues for his podcast. Alice Cooper, David Coverdale and Peter Frampton have all appeared on Live from Nerdville this summer. And that genre-blurring mindset is highlighted on Bonamassa’s new album, recorded at Nashville’s famed Ryman Auditorium: the concert closes with a spirited reading of “Würm,” the majestic three-chord coda to Yes’ “Starship Trooper,” first heard 50 years ago.

Bonamassa – whose early introduction to the blues was via Peter Green and Rory Gallagher, not Lightnin’ Hopkins and Robert Johnson – isn’t worried about the so-called blues police making a citizen’s arrest at one of his shows. “I look at my audience,” he explains, “and I assume that they’re just as familiar with Emerson, Lake & Palmer or Yes as they are with the blues. And a lot of times, I’m correct.” He emphasizes that he and his four band mates (a lineup he likes to call an “expanded power trio”) don’t take themselves too seriously. He says that the prog classic is “just something fun to play as a de facto piss-take on everything.”

Releasing a studio album, a live album and dozens of podcasts would be enough activity for two or three years in most musicians’ lives. But in the last 12 months, Bonamassa says he has also co-produced five albums by other artists. He’s also been busy with his Fueling Musicians initiative, a program administered by his nonprofit Keeping the Blues Alive Foundation.

Prior to the pandemic, the foundation raised nearly $700,000, Bonamassa says, donating those funds to schools and music programs. But when the pandemic hit the livelihood of working musicians, the nonprofit channeled its efforts into the new initiative. “We’ve raised a half a million dollars,” he says. The foundation gave $1500 relief packages to bands hit hard by the loss of performance opportunities. “$1500 isn’t life-changing money,” Bonamassa admits. “But it helps. It can help pay the mortgage.”

And if all that wasn’t enough, as Bonamassa and his band gear up for a run of live dates, the guitarist is delving into the new world of non-fungible tokens, or NFTs. His “One Song Record Company” NFT auction was set for July 31; the winning bidder would own an original master recording of a new and unheard song, “Broken Record,” along with publishing rights to the song, plus a 1959 Gibson Les Paul guitar, a 1963 Fender Vibrolux amplifier and other valuable “tokenized” items.

Bonamassa has charted his own path since the beginning, largely sidestepping the machinery of the music industry. And he characterizes his NFT as a “proof of concept” endeavor. A pilot project for a fan-funding model, his NFT means that “whoever buys the NFT gets something very unique that’s there’s only one of in the world,” he says. “And if it works out, I hope it inspires other musicians to get involved in the NFT space so they become more independent and self-sustaining.”

Remarkably, against the backdrop of all this activity, Bonamassa insists that he takes life at a slower pace than he did a decade ago. He says that back then, he used to tell people, “I’ve got this place in Laurel Canyon, and I hear it’s really nice!”

Come back tomorrow for more from my conversation with Joe. — bk

An edited version of this feature appeared in Metro Silicon Valley.