In the classic music idiom, concert violinist Anne Akiko Meyers is the equivalent of a rock star. Debuting onstage when she was only 7 years old, she has gone onto international acclaim, crossing into other genres while maintaining the rigor and finesse of her classical training. Meyers has been featured on more than 30 albums; her 2014 albums focusing on Vivaldi and three American masters made her the top classical instrumentalist on Billboard’s charts in 2014. 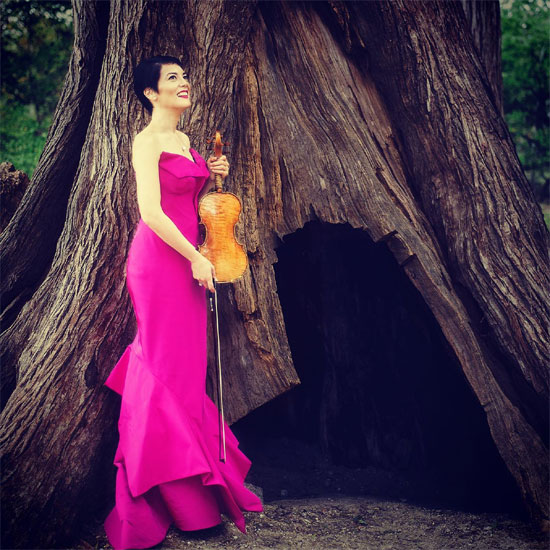 You guested on The Tonight Show with Johnny Carson when you were 11, and that was just one of your high-profile appearances at a young age. Did those experiences go by in a blur, or do you have a clear and vivid memory of them?

I remember them. I think back to waiting to perform and not knowing who Johnny Carson even was! I was pretty clueless on a lot of topics as a child. I had the opportunity to be on national TV with my friends, and to play in concert regularly at the Colburn School of Performing Arts in L.A. There were [many] concerts and activities that I was very lucky to be a part of growing up. And I’m very grateful for all those opportunities.

You worked fairly extensively with BMC conductor Keith Lockhart when you made the Serenade: The Love Album in 2016. Is there a kind of musical familiarity that comes with working with a conductor that you know?

Yes! I always enjoy working with Keith. I’ve worked with him with the Concertgebouw Orchestra in Amsterdam. We did a big outdoor concert there; it’s a beautiful piece by Jacob Gade called “Jalousie,” and we did the “Rondo Capriccioso.” We’ve worked throughout the years many times. He’s one of the hardest working maestros around. He made recording so many pieces in London a very enjoyable process. I always look forward to working with him, because there’s nothing to fear.

Tell me about what’s planned for your performance at Brevard Music Center.

I’m playing the Beethoven violin concerto. It’s considered the Mt. Everest of violin concertos, and it’s a healthy Matterhorn-sized 45-minute concerto! This is ‘it’ for violin, and it’s very demanding. It’s like running a triathlon, but on ice skates. Most people play the famous cadenzas by Kreisler and that’s what I used to play. But I thought, ‘I really want cadenzas that speak of today, so who is on par with Beethoven today?’ That would be John Corigliano. And he agreed to write these new cadenzas.

Would you say that your approach to the violin has changed over the years?

Yes. I feel like I’m a perpetual student. So, to try and hone one’s craft is never ending. When you see the genesis of any artist’s works – a painter, a comedian, an actor – you see flashes of “interestingness” throughout that just ebb and flow. It’s always fluid, it’s always changing, and I make sure that I’m always open. So, that’s why I’m really fascinated by working with musicians from other genres or working with composers of today. Because all music was new at one time.