The Rubinoos’ Pop-punk Nugget is Unearthed 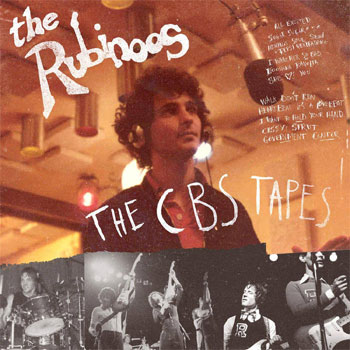 It wasn’t just punk that arose as an alternative to what many viewed as the overblown, corporate-flavored excess of 1970s rock. Along with punk, a kind of proto-indie pop was bubbling under. And a notable laboratory for those endeavors was Beserkley Records. Founded in 1973 by Matthew King Kaufman, Beserkley introduced the likes of Earth Quake, Jonathan Richman and Greg Kihn to the pop music landscape. Another leading light was The Rubinoos. The group would gain some fame for its cover of Tommy James & the Shondells’ “I Think We’re Alone Now,” released in 1977 right as punk was taking hold.

But that shimmering slice of pop displayed only one side of the versatile group’s musical personality. A new archival release shows that The Rubinoos had much more on their collective minds. Recorded as a demo of sorts in 1976, The CBS Tapes shows the Berkeley group exploring its love not just of AM Gold-style pop, but of Southern soul, surf rock and other styles. And it’s all delivered with a bratty sneer that suggests that – just maybe – The Rubinoos weren’t all that far removed from punk after all.

The Rubinoos played their first gig at Bay High School in 1970. From the beginning, the band’s sound was characterized by a strong emphasis upon vocal harmonies. A pivotal moment for the band was in 1975 when Earth Quake guitarist Gary Phillips saw the Rubinoos onstage. “We were playing a grand opening for Grand Auto at the corner of Grove [now Martin Luther King, Jr. Way] and University,” says guitarist Tommy Dunbar. “We were playing ‘Sugar, Sugar,’ and he was asking us, ‘Are you guys doing that because you’re serious, or are you making fun of it?’”

The Rubinoos were serious, but their approach to playing the song – as well as other covers in their set – balanced an appreciation for the originals with an interest in charging them up, playing them in a more rocking manner. And that’s the thinking they brought to a session at San Francisco’s CBS Studios in November 1976.

The Rubinoos had already debuted on record in 1975, with a cover of The DeFranco Family’s “Gorilla,” featured on the (misleadingly titled) various-artists LP Beserkley Chartbusters Volume 1. While their reading of “Gorilla” was a straight-faced, creamy pop confection, the band’s session as documented on The CBS Tapes is much brattier. There’s a looseness and lack of refinement to the performances that makes it equally appealing – though in a different way – than The Rubinoos’ more polished official releases of the era.

Part of that vibe came from the circumstances in which the recordings were made. Sessions were already underway in Berkeley for the band’s debut album, but the band took a break to play some local gigs. “Or maybe Beserkley ran out of money,” says lead singer and guitarist Jon Rubin, half-joking. When producer Glen Kolotkin began setup for additional album sessions at CBS, Dunbar says he invited the band to play. “Just go ahead and play anything want to,” Kolotkin told them.

In contrast to 1977’s The Rubinoos, an album dominated by Tommy Dunbar’s songs, this essentially impromptu session features the group running through an 11-song set that includes only three original tunes. The covers – and the band’s approach to them – reveals a great deal about their musical mindset.

A song like “Heartbeat, It’s a Lovebeat” – another DeFranco Family song – is often thought of as treacly, disposable pop. But on The CBS Tapes, The Rubinoos elevate it, rocking it up in a manner that suggests how a band like Redd Kross might have tackled it a couple of years later. And just when he band’s trademark harmonies pull it back toward pop territory, Dunbar lets loose with a stream of expletives taking the place of a guitar solo.

The four band members – Rubin, Dunbar, Ader and drummer Donn Spindt – let their guard down completely as they tear through the songs. Yet there’s a consummate professionalism, a focus on getting the songs right, that belies the tender age of its participants. 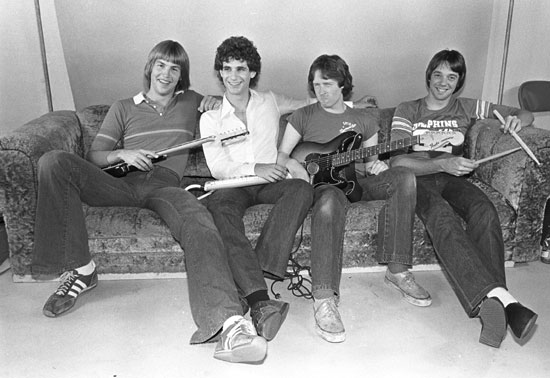 While the band played and joked around, Kolotkin rolled tape. With the producer mixing in real time, the entire session was recorded directly onto a two-track machine. In the process, Kolotkin captured a high-fidelity version of what one might have witnessed if they stopped by the home of Rubinoos bassist Royse Ader. “We [usually] had out gear set up at Royse’s mom’s house,” says Dunbar.

Bay Area garage punk outfit Psycotic Pineapple would release Tommy Dunbar’s “I Want Her So Bad” as their debut single in 1978, but The CBS Tapes features The Rubinoos’ earlier take on the song. And in sharp contrast to the pure pop of “I Think We’re Alone Now,” their performance is snotty punk. Dunbar laughs when asked how he thinks Psycotic Pineapple’s version compares with his band’s off-the-cuff recording. “Well, the wheels aren’t coming off the way they are in our version,” he says.

The Rubinoos’ punk/new wave bona fides should never have been in doubt, though. The presence of Jonathan Richman’s “Government Center” on The CBS Tapes is a reminder that the band already had a strong connection to the proto-punk pioneer. “We were Jonathan’s backup band when he first came out from Boston,” says Dunbar.

Just to tie everything together, Dunbar notes that the opening riff of Richman’s song bears a similarity to The Rubinoos’ first hit. He says that his band was playing “Government Center” before Gary Phillips introduced them to the 1966 “I Think We’re Alone Now” single.

The Rubinoos were certainly out of step with prevailing commercial trends when they cut the live-in-the-studio The CBS Tapes. That month, the most popular albums on the U.S. charts included The Song Remains the Same, the first Boston album, Frampton Comes Alive!, Lynyrd Skynyrd’s double live LP, and Steve Miller Band’s Fly Like an Eagle. “But on the 4-minute drives to Royse’s house for practice,” Rubin says, “we were listening to compilation tapes of oldies.”

“And,” adds Tommy Dunbar, “The Sonics and Iggy and the Stooges.” Now it all makes sense.

An edited version of this feature appeared in SF Weekly.