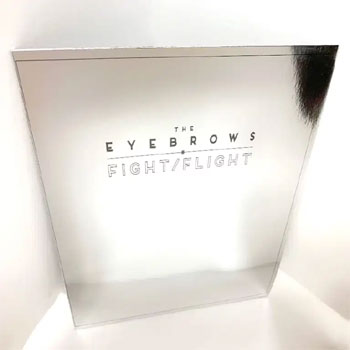 The silver cover may remind you of the Monkees’ “Head” LP. It’s similarly difficult to reproduce in a photo.

Listeners wandering into Fight/Flight expecting some sort of slavishly imitative power pop outing a la [any of hundreds of current artists; pick one] will find themselves in for a shock. The Eyebrows’ latest album starts out with a blast, the yelpy “Have Mercy, Lose Control.” And things never let go. The opening tune plays with the listener’s mind by starting off slowly and then winding up the beat, all in the first few seconds. And the song itself balances pop with a greasy, Jerry-Lee-level wildness that conjures the ghosts of Like Flies on Sherbert. But the group holds things together in a way that Alex Chilton didn’t (‘least not that day).

And then there’s the heavy rock squalls of “Demon in My Head,” combining blues and reckless abandon with a bottom end worthy (but not reminiscent of) Black Sabbath. And a crazy, phase-shifting guitar solo to boot. “Until You Know” updates teen balladry of the ‘50s for current day. More roaring guitars and an overwhelming sense of exuberance characterize the riffing, glam rock of “Ice Cream Cone.”

Just like last time, Mitch Easter produced the Eyebrows for this album. And if you have any preconceptions about what his work “sounds” like, this will blast those to pieces. His production is unfussy, uncluttered and direct, but he leaves no fingerprints: what you hear is what The Eyebrows sound like.

And on “New Year’s Eve,” they sound like a Southern answer to Material Issue or Cheap Trick. Fight/Flight is a consistently strong album, but to these ears, “New Year’s Eve” sounds like The Single. But your pick may be different; you might prefer the maniacal “It’s Dark,” with its midsection that crosses streetwise NYC punk vibe with, um, shades of Martin Denny.

Or maybe you’d pick “Disguises,” the sort of song that would be the highlight of an imaginary Yellow Pills Vol. 5. Sharp riffs, soaring vocal lines and an arrangement that demonstrates A-level skill at song arrangement. The title track leans more heavily on keyboards, but it’s almost (yet most assuredly not) prog in its musical ambitions. “Just Let Go” suggests what The Knack might sound like in 2021.

There. Are. No. Duds. On. This. Record. Honestly, the album only seems to get better and better as it goes along. Just when I think I’ve decided upon my favorite cut, another one comes along. Plenty of bands would sacrifice everything for a greatest-hits album this good.