With Cropper’s buy-in to the idea, Tiven enlisted the skills of drummers, including ace session man Anton Fig. Cropper has long been friends with the South African-born precussionist. “You’d know him from Saturday Night Live and David Letterman’s show,” he says. But Fig also played drums in a later version of Booker T & the M.G.’s, manning the drum throne originally occupied by Al Jackson, Jr., who died in 1975.

And while Fire It Up does feature vocals, those are provided by Roger C. Reale. Best known for his work as a hard-rocking punk pop artist, Reale recently oversaw the reissue of his late ‘70s recordings leading a band called Rue Morgue. The first of those records, 1978’s Radioactive, originally came out on Big Sound, a label whose staff included Tiven; that’s how the two first came to work together. Tiven and Reale have remained in touch through the years, and Tiven suggested Reale – whose vocal talents display a soulful character – as the ideal vocalist for his revived project with Steve Cropper.

“When Jon asked me if I wanted to work on these tracks,” Cropper recalls, “I said, ‘Well, we’re going to need a singer.” When he heard some of Reale’s work, his reaction was immediate: “Woah; he’s good,” Cropper said. 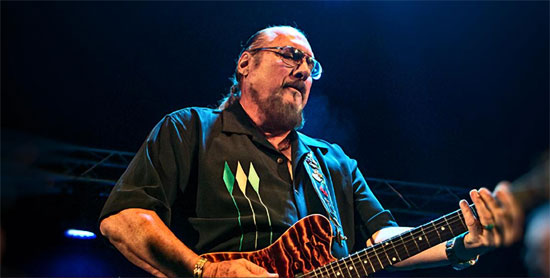 As the guitarist explains, Fire It Up was completed remotely. “The trick to it was very simple: Tiven has a studio in his house, and I’m five minutes from the studio,” Cropper says. Reale, meanwhile, was 1100 miles away in Boston. “I still haven’t met him,” Cropper says. “He will not fly out here to Nashville until he gets his vaccination. He’s waiting now to get it.” But Reale was able to complete all of his vocal recordings in Boston. “All of the vocals that Roger did were done on an iPhone,” Cropper says. “The engineer processed them so they sounded like they’re supposed to, even before we put them on ProTools.”

Nashville’s COVID-19 restrictions have been less stringent than those in some other parts of the country, so Cropper could get in his car and drive to the studio. “I’d just come down to RCA, and we finished mixing the album,” he says. Fire It Up is book-ended with a set of “Bush Hog” instrumental tracks that hearken back to the glory days of Booker T & the M.G.’s; the rest of the album features Reale’s vocals leading the way, and sparring with Cropper’s lead guitar work.

Referring to the original recordings from ten years ago, Cropper says, “We had some pretty good music out there.” And while he and Tiven didn’t have any participial artist in mind when they wrote those pieces, they provided a solid basis for Fire It Up. “Most of them, I’d forgotten about,” Cropper admits. “Some of the titles were my ideas, but a lot of them were Jon’s and Roger’s ideas.” As Reale would finish each recording, he’d send it to Tiven and Cropper, soliciting their feedback. Cropper was impressed: “I said, ‘Right on! Keep going! Send another one!”

In fact, the basic tracks from 2011 weren’t as raw as they might have been. That owes in large part to Steve Cropper’s long-established method of songwriting. “When I was producing hits, I would give the advice to people: ‘I hear a song finished. I have to work with it in its raw stages, but I hear it finished and on the radio.’” So his method of constructing a recording isn’t really exploratory in nature; instead it involves working toward what he hears in his head.

“That’s what I did, and that’s what I do,” Cropper says. “A lot of artists, believe it or not, cannot hear a song finished. They just take it for what it’s worth, and they value everything based on that. Their opinion of it is based on what they hear, and I can’t blame them for that.”

An old hand at making successful albums – he’s produced dozens – the 79-year-old Cropper made the transition quite easily from the days of analog tape to modern-day methods, employing Apple loops, ProTools software, and digital file swapping. But he’s modest about the ways in which his skills apply to the music industry of 2021.

“I don’t know,” he says. “I lost the industry a long time ago. Some things I’ve got, some things I don’t. I don’t know the whole business anymore.” He says that for many years, he kept his finger on the pulse of the music scene through his friendships with radio deejays. And he clearly still pays attention: with some pleasure, Cropper notes that he’s hearing deejays on the radio more than he did a few years ago.

Cropper’s approach to the guitar has never been flashy; instead, he crafts memorable, melodic guitar melodies that stay with the listener long after the song is over. That’s a quality that remains on display on Fire It Up. And Cropper’s philosophy of music is as straightforward as his playing style. “I don’t try to do music over the public’s head,” he says. “I’m not saying that only simple stuff works, but it sure does help.”

He says that he treats music the same way he treats fishing. “Fish are not going to bite on the same lure in the same place every day,” he says with a knowing smile. “You’ve got to change it up some. Change that lure! A good fisherman will tell you that.”

Speaking in mid-March, Cropper remained circumspect regarding the possibility of post-pandemic live dates in support of Fire It Up. “I’m sure the record company’s going to expect me to get out and play some,” he says. “And if we can’t do it live, we’ll have to do it by Zoom. We’ll see what happens.

But he recognizes that the pent-up demand is there for live music. “Will the large audiences come back? I don’t know; I have no prediction for that,” he admits. “But I know that the fans right now are very eager to get back to dancing and listening to music. I think they’re getting tired of just listening to stuff. They want to see the artist perform, and they’re eager to sing along, dance, whatever they can do.”