From One Stage to Another: Izzi Hughes

Though she’s barely into her 20s and still in school, Hendersonville native Izzi Hughes is a seasoned performer. Gaining experience in musical theatre and acting as a youngster, she first appeared onstage fronting a rock band, Calculated Error, when she was just 10 years old.

Izzi doesn’t come from a musical family; needless to say, her parents were surprised and pleased when they witnessed her rock ‘n’ roll debut. “They had never seen me in a rock band-type setting before,” Izzi says. The band’s set featured young Izzi belting out Adele’s 2010 hit “Rolling in the Deep.” She recalls her parents’ reaction: “They were like, ‘Who is this little diva who just walked on stage?’ Because I had really taken a lot of the sassiness that I’d learned from acting and kind of put it on stage.” 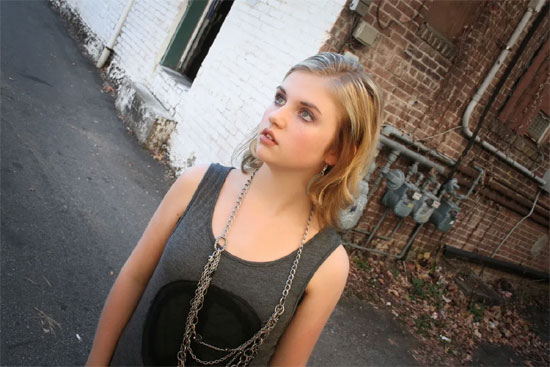 By age 12 Izzi turned her attentions fully to music. “I decided to put the acting on the back burner,” she explains. Encouraged by her parents to learn to play an instrument, she chose the guitar. Her reasoning had everything to do with her performance-based focus. “Guitar seemed like an instrument that would lead into me being able to sing with it,” she says. By age 14, Izzi was writing songs. Though she describes herself as primarily a “covers artist” (playing the music of other songwriters, she enjoyed the challenge of songwriting.

Inspired by a Robert Frost poem, Izzi wrote “Straight Through” when she was still in middle school. Her second composition, “The Jones” – about societal pressure to keep up with those mythical neighbors – followed during her early high school years. Izzi would eventually travel to Nashville to record both songs in a professional studio.

She says that the subject matters of songs were relevant to her life at the time, but “they could also be relevant to anybody at any age. I tried to take a theme and [write] about things we all [experience],” she says.

But songwriting isn’t a primary endeavor for young Izzi, currently a student at Belmont University in Nashville. “I don’t write very frequently, because I don’t have that passion for it when I’m by myself,” she says., noting that she is looking into co-writing – a practice quite popular in Music City – in the near future. “My true passion is singing,” she says.

Izzi looks back at a contest win at age 15 as one of the landmarks of her budding music career. “I entered in to a Wild Wing Cafe ‘throwdown’ contest,” she recalls. It was one of her first solo voice-and-guitar performances, and while she lost in the competition’s first round, the organizers asked her to return. “They had a final show where 10 or 12 participants all appeared,” she says. Izzi sang and played one of her original tunes and a cover of Imagine Dragons’ “Radioactive.” Instead of a judges’ panel, “There was an audience vote, and I won that,” she says.

These days, Izzi’s entire life is about music, and she approaches it from multiple angles. “I’m going into my senior year, studying music business with an emphasis in production,” she says. Izzi acknowledges the go-for-it mindset embodied in the adage, “If you really want to succeed as a musician, you can’t have a back-up plan.” But she doesn’t see things that way.

In one sense, earning a music business degree is her backup plan. “Because that would [allow me to] be involved in the music industry and make a living and be able to feed myself,” she says. But there’s more to it than that. The degree will help equip Izzi with a more well-rounded approach to music. “I’m learning how to market, how to make publishing deals, and about contract law,” she explains. “All of these things are beneficial for myself as a musician, and they’re also beneficial to help [me to help] other musicians.”

Even though she spends most of her time in Nashville the days – “I’m hoping to move there permanently,” she says – Izzi’s busy schedule allows her to book live engagement back in her Western North Carolina hometown. “The music scene’s opening back up after COVID really messed things up for awhile,” she says. “In April of 2020, all my performances were stopped.” But she understands that it made sense to put things on hold during the worst of the pandemic. “It could’ve been a whole lot worse,” she acknowledges.

She has long since left her acting career behind, but Izzi Hughes continues to draw upon the lessons learned as a child actor. “I’m a pretty introverted person,” she admits. “I have my acting background to thank for the stage presence that I do have.”