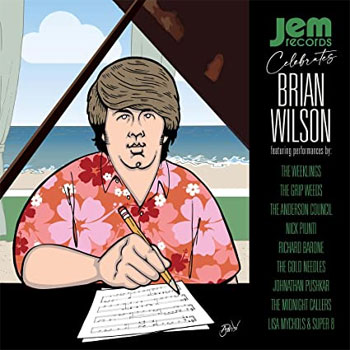 Here we go again. I’ve long held that various-artists tribute albums are by definition uneven. Some acts try to take the songs too far from their essence, stripping the songs of whatever made them special and noteworthy to begin with. Others are too slavish by half, effectively adding nothing to the discussion, making what amounts to karaoke covers with inferior vocals. Yet there seem to always be at least one or two tracks that defy the lack of inspiration found elsewhere; they make the entire affair worthwhile, almost (but not quite) redeeming the duds or flame-outs elsewhere in the set.

Nothing about Jem Records Celebrates Brian Wilson is changing my opinion. All of the artists are starting with some of the greatest songs in the pop canon, so there’s really no excuse for turning in a dud. The songs themselves are often deceptively complex on the instrumental side, and the vocals on the originals … well, that almost goes without saying: they’re finely layered, sometimes transcendent.

The Weeklings do okay with “The Warmth of the Sun.” I suppose it’s unfair to compare them to the Beach Boys, but they invite such comparisons by giving us an a cappella reading. The rocked-up “Help Me Rhonda” tinkers with the phrasing: the Weeklings earn points for inventiveness. Thing is, the changes don’t work that well.

The Grip Weeds knock “You’re So Good to Me” out of the park, finding an effective way to wed “la-la-la” vocals to a muscular arrangement. Bravo. Their reading of the majestic “Heroes & Villains” (with some additional SMiLE material tacked on) is ace as well. These two tracks easily fulfill the “makes the album worthwhile” requirement.

Nick Piunti sidesteps the Pet Sounds “I Know There’s an Answer” rewrite in favor of the more adventurous “Hang Onto Your Ego.” He does a fine job with the song; no complaints here.

Rather than piling on the poor fella, with regard to Johnathan Pushkar’s contribution, “Dance, Dance, Dance,” let’s just say that it’s consistent with my previous comments upon his approach and delivery. Collaborating with Richard Barone ought to make “I Get Around” more successful. It doesn’t. Bereft of original thinking. My thoughts on “Please Let Me Wonder”? I’ll let you wonder.

The typically reliable Gold Needles take on the lovely “Love & Mercy,” but for me, while the new arrangement ideas would seem to work on paper, the execution doesn’t do it for me. Your mileage may vary, and the band is so good that I’m happy to give them a Mulligan here. The lead guitar break is nice.

The Anderson Council’s “Girl Don’t Tell Me” isn’t earth-shaking, but it’s completely enjoyable. Even better is the lesser-known “I’d Love Just Once to See You,” the second-most left-field choice on the album. They make it sound like they wrote it, but do so without losing the Brian Wilson-ness of it.

“In My Room” is a daunting song to attempt. Richard Barone makes it his own, effortlessly. Okay, maybe he put a lot of effort into it. Point is, he understands the song and treats it well.

The Midnight Callers give “Do It Again” a pop-punk-flavored makeover. It works! That middle eight…niiiice.

Lisa Mychols & Super 8 take “Don’t Worry Baby” into girl-group territory, making one wonder why it hasn’t been taken there before. (If it has, I missed it.) No matter: it’s lovely. And they win the award for most adventurous song selection with their reading of “Pet Sounds.” Shades of exotica. I could luxuriate in an entire album’s worth of this kind of music.