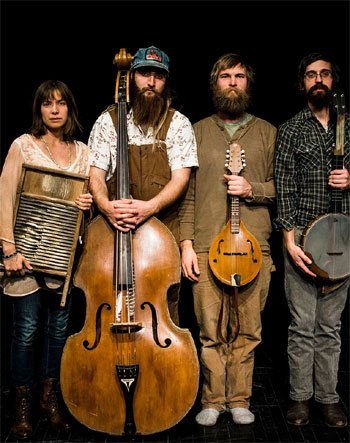 Pretty Little Goat bridges the gap between old time and contemporary music. Loosely defined as a string band, the Brevard-based quartet draws much of its inspiration from the music of the mountains, says mandolinist Josh Carter. “The hills are always calling,” he says. But although Pretty Little Goat has its roots in tradition, the group isn’t stuck in the past.

While emphasizing that he loves the sound of the guitar, Carter says that not having one helps give his group its distinctive sound. “A guitar creates this driving, mid-tone rhythmic presence,” he explains. “By exploring things a little bit differently, we were able to come up with a different feel.” And the band enjoys the opportunity to do something outside the ordinary. “Even though we love old music, we don’t want to always do things the way people have done forever,” Carter says. “We want to push some boundaries.”

Another way that Pretty Little Goat approaches things uniquely is in its use of percussion. “Mallory has such a unique feel on the washboard,” Carter says. “From the beginning, she was very stubborn about learning her own thing.” He admits that sometimes made things challenging. “I’d say, ‘Just hold down a regular drum beat,’” he recalls with a laugh. Mallory’s reply? “No, I’m going to do my own thing.” But Josh says that she grew into the role, “and has become a really innovative percussionist, doing things no one is doing.”

When the group began, its music was based firmly in the old-time style. “We started out playing music from the Civil War period through the early 1900s,” Carter says. “Pre-bluegrass, pre-country; we really dove into the roots of music from before the era of recording.”

But today the group’s repertoire is a balanced mix of traditional and original songs. The latter fit well alongside the old song, even though they’re informed by a different and wider set of musical influences. “We also listen to country music, bluegrass and all across the spectrum,” Carter says, noting that he’s inspired by “rock and roll, hip hop, and even psychedelic music.”

Pretty Little Goat’s last major performance prior to the 2020 quarantine was a late December headlining spot on the main stage at Asheville’s Isis Music Hall. “It was the best show we’ve ever done,” Carter says. A live recording of the concert is available on the band’s website. “We worked up a set of music that was a combination of old traditional songs and original music, of instrumentals and singing.” A guest spot by acclaimed lap steel and dobro player Jackson Delaney and a rousing opening set by Nashville sibling act Giri and Uma Peters made for an even better experience. “All that plus having a full house with the right people in the audience made for a magical evening,” Carter says with pride.

And although the worldwide pandemic is tragic on many levels, there are the occasional silver linings. “Thanks to the pandemic, we’ve had all this time to work on our home studio,” Carter says. “Our professional studio is set up now. And I’ve been taking online music production courses, learning everything I can. So that’s where we are now: pushing the envelope of what we can do musically as a band, pushing it in the studio so that it raises the bar for our live performances.”

“Original music is where our focus is right now,” Carter says. Those old-time songs will always be a part of Pretty Little Goat’s aesthetic. “But now I think we see ourselves more as artists than traditionalists,” Carter says. “So we tend to look more at what’s going on in the world. We bring a positive message so that audiences can get something from a show and take that to their relationships, and do something good with it.”