Stringduster Travis Book, At Your Service

Launched in 2006, jamgrass sensations The Infamous Stringdusters would go on to build their reputation on the strength of live shows. Temporarily sidelined by the pandemic, in December the band released its first holiday album, Dust the Halls. Several band members also began offering personalized music instruction online. Bassist – multi-instrumentalist, really – Travis Book has taken on an additional pair of creative endeavors. His once-a-month Travis Book Happy Hour builds upon the concept of a variety and talk show, live-streamed from Asheville’s Grey Eagle. And performing in front of a strictly limited, socially distanced audience, he has also established “Travis Book and Friends,” a monthly residency at 185 King Street in Brevard. 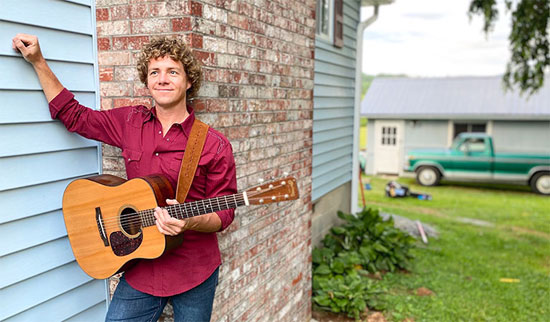 What’s the basic concept of the Tuesday night “Travis Book and Friends” performance series?
Once I started the Travis Book Happy Hour, I had guests coming in. I was going through the trouble of putting together this ensemble, rehearsing this music, and getting ready for the show, and it dawned on me: “It would make a lot more sense if we had a night to do a kind of shakedown cruise.”

I live in Brevard, and 185 is an incredible venue with great people; it’s a cornerstone of our music community here. So I was inspired to do whatever I could to help them stay afloat during the COVID era.

How does the show differ from the Happy Hour?
With the Happy Hour, there’s an interview element. It feels much more like a variety or TV show: commercial breaks, an announcer. Whereas the Travis Book & Friends shows feature about twice as much music, and they’re a little bit more informal. You get the sense that we’re experimenting with material and getting used to playing with each other. Then on Wednesday at the Grey Eagle, we take the best of what happened on Tuesday night and perform it in the live stream context in front of cameras, be recorded for posterity.

How do you choose the guest artists for these shows?
Ultimately, it’s whomever’s willing to do it! [Laughs] But it’s a complex process because I’m asking people to do something that’s a little out of their comfort zone. I like to dig in a little deeper; I’m looking for musicians I have a relationship with, who have something to say, who have a distinct sort of character about them. I invite people who I know and who can trust me to put together a unique show and make it easy for them.

What have you learned in the process of putting these shows together?
A couple things. One is that there’s a segment of the population who really needs live music, and they really thrive when they get that. The other thing is that with coronavirus upending the music industry, it demanded that everyone in it take a look at what they could offer. For some musicians, the answer has been that there’s nothing for them to do; they stay home. But for me, the answer was to use the opportunity as a form of service.