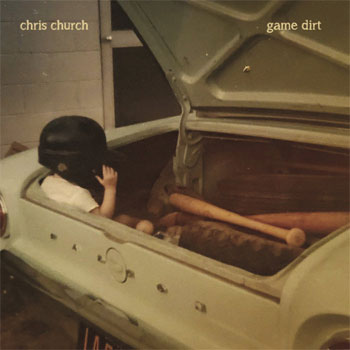 Chris Church is that rare musical auteur who succeeds at most everything to which he applies his talents. And his body of work resolutely resists pigeonholing; he’s done everything from metal to prog to powerpop to .. well, you get the idea. And carrying forth the proud tradition forged by Paul McCartney, Stevie Wonder, Emitt Rhodes, Todd Rundgren and select others, on Game Dirt Church works alone.

The bouncy pop of “Learn” had its roots planted firmly in a universally-known tune by another composer, but don’t let that attract from its irresistible charm. Elsewhere – and perhaps riffing on the album’s baseball theme – he changes batters mid-inning: “Falderal” kicks off as a singer-songwriter style tune before heading off in a wholly different direction. It’s a jarring shift, yet it works.

There’s a close-in, intimate vibe to the songs; “Fall” is a prime example. You’ll feel as if you’re in Church’s bedroom studio with him as the recorded captures the performance. But hey, over there in the corner is a massed Church chorus, as tight as any backing vocals on a Steely Dan LP. That deft balance between intimate/informal and clear-coat polish is a key characteristic of Game Dirt. So, too, is the tasty yet tantalizingly brief lead guitar break on “Fall.”

“Lost” has a ragged, Neil Young vibe. The chiming “Trying” applies hooks to a melancholy tune, one that lands midway between Matthew Sweet and Gin Blossoms; not a bad place to come down. “Hang” is a spiky riff-rocker that vaguely recalls Led Zeppelin, albeit with welcome down-to-earth vocals. “Know” rocks out mandolin-style. The good-timung “Smile,” too, mines a country rock vein. “Removed” makes a convincing case that there’s plenty of life left in the oft-maligned classic rock format; it’s not a stretch to imagine Velvet Crush playing the track. Stick around to the very end and you’ll be rewarded with “Sunrise,” quite possibly the best cut on a lineup that’s all hits, no errors.

You may have noticed that all of the album’s 13 tracks feature one-word titles, a tic that also characterized one of Todd Rundgren’s one-man excursions, Arena. But where that album had a slight whiff of let’s get-this-done-ness, Game Dirt sounds like the product of careful, meticulous planning, preparation ,execution and delivery. One might even say (though I won’t, because I avoid clichés like the plague) that Chris Church has hit a home run.