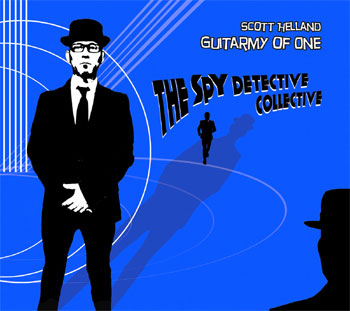 I’m very much a fan of spy/detective/crime/noir-style music. I was over the moon when I discovered someone – Derrick Bang – had written a book about it. I was every bit as pleased when nearly as pleased when Jean-Michel Bernard crated an album-length tribute to one of its chief practitioners, Lalo Schifrin. And I was similarly chuffed when I received a review copy of Guitarmy of One: The Spy Detective Collective.

Scott Helland has a solid pedigree, having been in bands with J Mascis and Lou Barlow (but not those bands). But Guitarmy of One isn’t really in the punk/indie vein. With a drum machine and programmed backing – hey, at least that’s what my ears tell me – he digs into ten original songs that draw inspiration from classic crime music. The titles tell the tale: “I Spy the Prisoner,” “Nonesuch Napoleon Solo,” “Rockford Reckoned.” You get the idea.

These tunes don’t actually quote the songs/themes to which they refer. But they aim for a similar spirit and ambience. Helland’s instrument of choice is the Godin Multiac guitar, a curious beast that (a) has nylon strings like a classical guitar but (b) is electric. It has a distinctive sound all its own, and that sound is what you get on Guitarmy of One. Unlike conventional electrics, tt has – again, to my ears – pretty much one tone, but it’s a rich tone at that. Helland does enliven things with bits of wah-wah and other carefully/lightly applied effects, but that sonorous acoustic vibe, applied to the electronic backing, is the core approach of the album.

Guitarmy of One is catchy stuff; Helland understand that this subgenre of music relies heavily upon signature licks, and those licks need to be memorable and straightforward or they fail in their mission. Helland largely succeeds. Listeners looking for sonic variety might not find their needs met by this collection, but for those who understand what Helland is trying to get at with the project, Guitarmy of One: The Spy Detective Collective is an enjoyable listen.