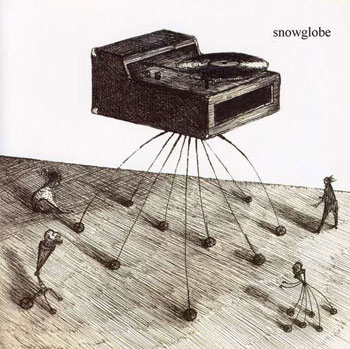 The groups associated with the Athens, Georgia-based Elephant 6 Collective are a mixed bag. While all share a certain musical sensibility, Neutral Milk Hotel and Of Montreal each appeal to a slightly different subset of listeners than does Olivia Tremor Control (my personal favorite). And what is and is not an Elephant 6 band is the matter of some debate; some consider the Memphis-based Snowglobe part of the pack, while others don’t.

Ignoring geography and focusing instead upon musical values, Snowglobe shares characteristics with Olivia Tremor Control. Take grand ambitions – the kind of mindset that theoretically leads to a Pet Sounds or at least a Van Dyke Parks record – and combine them with limited access to (a) the necessary funds and (b) the studio technology, and you might end up with something like Our Land Brains, Snowglobe’s 2002 long-playing debut.

Every bit as fascinating and engaging as OTC’s 1996 debut Dusk at Cubist Castle, Snowglobe’s debut features a rich and textured tapestry of instruments not often found on rock albums. Pop gems like “Dream Works” recall everything from Paul Williams to Three Dog Night to Harry Nilsson to … well, some of those Elephant 6 bands. You’re more likely to hear creaky, parlor-room upright piano than some studio grand.

Fiddles, tympani and banjos weave in and out of the mix. The term Americana hadn’t yet entered the lexicon as a musical term when Our Land Brains was made, but the manner in which the record draws from pre- and non-rock traditions means that it falls (if loosely) into that category. A resolutely indie sensibility keeps things from falling into self-conscious precious territory.

Olivia Tremor Control had the keen foresight to release their debut on vinyl (and then to reissue it in that format multiple times). For whatever reason – lack of pressing plants? – Snowglobe’s Our Land Brain never got a vinyl version … until now. Somehow it seems fitting that this jewel of an album is receiving a vinyl reissue. The Nine Mile Records 2LP version is packaged in a sturdy gatefold sleeve, but listeners seeking information beyond song titles will be forced to look elsewhere; even the record labels are bereft of details.

But then that’s not the point. Come – and stay – for the music.