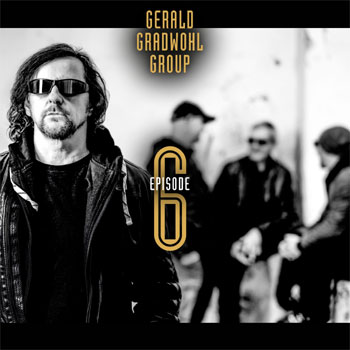 What might it sound like if Metallica was influenced by Allan Holdsworth? The answer might just be Episode 6, the new album by the Gerald Grawhol Group. But then Metallica have not (to my knowledge) worked saxophone into their sound. This Austrian four-piece led by guitarist Gradwohl does feature tenor sax right alongside bass and drums. The instrument imparts a jazzy feel to these knotty, tautly composed instrumental pieces. The music swings, pummels and grooves, sometimes all at once. There’s even a playful vibe to the tunes, a quality not often found in progressive/jazz excursions.

The meditative “Longing for Home” demonstrates that the GGG is about more than heaviness. Its dreamy vibe has enough bite to sustain interest for those who don’t want mellowness. “The Essence of time,” however, veers in the direction of a kind of smooth jazz; didn’t see that coming. “Jabo” starts off the same way, but its understated vibe hides some thrilling guitar work.

There’s a danger, though, in name-checking other artists when describing this music. Because the Gerald Gradwohl Group has a sound resolutely its own; these guys don’t sound like anybody else. The music might be too rocking for jazzers, too jazzy for meat-n-potatoes rockers. But for anyone who’s open to both genres, this is a new kind of fusion. Recommended.