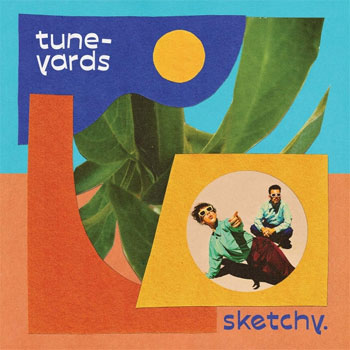 I recently engaged Merrill Garbus of Oakland-based indie group tUnE-yArDs; our conversation was the basis of my recent feature in SF Weekly. But a few of the topics we discussed didn’t make their way into that feature. Here, then, are highlights from the rest of our interview. – bk

What are your current thoughts regarding a return to live performance?

A year and two months ago, I really was feeling like, “I want large groups of people to sing together indoors,” and that’s literally what we cannot do now. The law says, “We do not recommend singing indoors.” Then there are the climate factors. If we’re going to tour like we have in the past, it would make me feel more comfortable to tour with a smaller team of people, so that we’re not flying a bunch of people around the world. So that ends up being a factor too.

I’m trying to think of it from a purely musical point of view. I think I would probably get into a barn and teach audiences the harmony parts and feel like we’re singing together. That’s the vision that brings tears to my eyes and feels appropriate. I want to be in concert with people who are listening to our music, and I’ve always felt that kind of audience attraction, that an audience doesn’t feel like they’re simply being wowed by a performance but that they are absolutely crucial to the performance.

Going back to the beginning, you successfully broke out with a “pay what you want” approach to your first album. And then, eventually, you got a major label distribution deal. With hindsight, was that your plan from the beginning, or did the level of success that you found take you completely by surprise?

Completely by surprise; it was not part of the grand plan, no. I mean, I was thinking about it.

I watched the Doja Cat performance on the [2021] Grammys and she kind of said, “This has been the plan all along.” And I was thinking, “Oof, more power to you. You did it. You knew exactly how to do it, and you did it,” which is not to take away the work that it takes to do that, I’m sure.

It’s just there’s absolutely no way. Because I was traveling in the circles of experimental theater, I was used to really really really small audiences and used to a level of attention and interest in my work that was just in the handful of the people and not at all on any sort of mainstream scale, and not on a scale that I thought would ever make enough money to provide a living.

Keep in mind, also, that I started tUnE-yArDs when I was extremely depressed, so my thinking was not far in the future. I don’t think I could conceive of life very very far in the future. (And I’m not saying I lived in a constant state of being suicidal.) When you’re depressed – something that happened to me, at least – was a kind of brain fog about where I was headed. So, I was just doing a thing that I felt was life-affirming, that was something that made me want to still be alive.

Then, there were a couple of people who…Jane Abernathy [sp?] who signed us to 4AD, my friend Patrick Gregoire who I started playing music with and who really believe that we could make a living. It was the people who kept telling me, “No, this is really worth your while.” I had to hear that from people on the outside.

To the extent that you look at reviews, you’re kind of a critic’s darling. There has been consistent praise for your work, and what I wondered is: when you started getting those early critical plaudits, how did that affect you? Did it put more pressure on you or are you one of those people who really steers clear of reading reviews completed?

Well, now, I’ve become a person who really steers clear of reading any press. I’m sorry, I will never read the piece that you’re writing. I’ll just have to enjoy the conversation instead.

Yeah, I mean, I’m an A+ student. I was goody-two-shoes. That is what I expect of myself, and I am very much a perfectionist in that way. It’s a mixed blessing, because people start to hate you when you get a lot of good reviews. And you start to hate yourself if you’re used to being counterculture and, suddenly, you’re getting a lot of good reviews. All your experimental jazz friends start to be like, “Well, of course!” You start to get in your head about what it means to be lauded in that way.

I think there were a couple reviews that I didn’t even read, I just heard about them from friends or friends of friends, and the gist that I got from them was that someone was betting against me. Someone was saying, “Oh sure, you like this now, but are you going to like this in five years, ten years?”

Also, something which I think is a correct thing to challenge tUnE-yArDs on is: how do we reckon with this white woman being very influenced by Black music in a lot of different ways? So, in the former, that feels like, “Okay, I don’t need to listen. I don’t have anything to prove to anyone else but me,” and I’m hard enough on myself. I already say, “Oh, you think you have another whole album left in you?” So, I don’t need to engage with that kind of review.

In the latter, I have my own process and self-examination and rigorous work around being white in this industry. I’m not just influenced by, but really I owe my life to Black music in every way. And I have my own personal reckoning and process with that. The limited purview of reviews that just want to bring me down and kind of engaging in that kind of cancelling are also not helpful. Maybe there are people who are wanting to have conversation and wanting to influence culture and say, “Here’s where this isn’t okay.” But, again, I’m already engaged and critical of myself enough that I don’t need to engage with individual critics necessarily in that way.