Different by Design: tUnE-yArDs Get Comfortable Being (a little) Less Weird

When Merrill Garbus made Bird-Brains – the 2009 debut recording from her Oakland-based project tUnE-yArDs – part of what earned the album critical plaudits was its quirky, offbeat character. Eleven years and five albums later, tUnE-yArDs returns with Sketchy. And at this point in her career, Garbus and her primary collaborator, bassist Nate Brenner, feel less inclined toward making music that’s different-for-different’s-sake.

“Thinking about how I approached songwriting in my earlier days, I think I felt a lot more insecure about writing catchy songs,” Garbus admits. “There was something that felt really important about setting ourselves apart, being creative or more creative than the pop music that I heard.” She says that when she made Bird-Brains and its 2011 followup, Whokill, she was drawn toward making music that was “different, experimental or whatever you want to call it.” 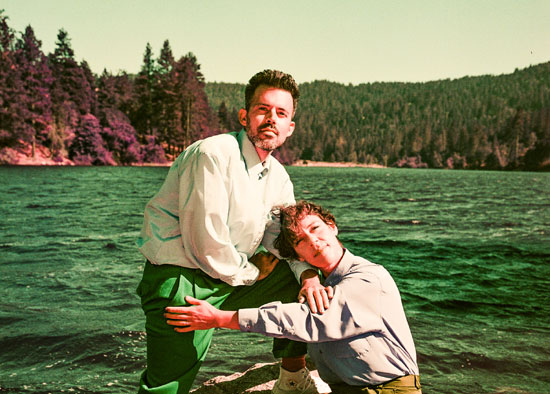 Those qualities are still very much in evidence on Sketchy, released March 26 on tUnE-yArDs’ longtime label 4AD. But there’s also a sense that Garbus and Brenner are more comfortable applying those characteristics to melodies that are accessible, to songs designed to remain in the listener’s head long after they’re heard.

“As we mature, I do think that we’re more comfortable with settling into catchy choruses,” Garbus says. “tUnE-yArDs has a texture that is very different than a lot of other sounds of other groups; we don’t have to prove ourselves to be different anymore.”

For Garbus, some of that increased confidence may have come as a result of applying her inimitable talents toward the creative goals of another artist. In 2019, tUnE-yArDs provided the score for Boots Riley’s dark comedy film Sorry to Bother You. Garbus agrees that film scoring “really feels like you’re supporting someone else’s vision,” but that the fact that Riley – a musician in his own right – brought tUnE-yArDs into the project for a reason.

Riley “already felt [that] our aesthetic, our take on music, would be the same,” Garbus says. “I’d have to ask him, but I would imagine that he’s hearing music in his head as he’s crafting the story and the words.” She admits that after making 2014’s Nikki Nack, she was “having a lot of questions about what the heck we were doing as a band.”

Working on the score for Riley’s film was “part of an evolution,” Garbus believes. It afforded her “freedom to not have to think about what the music was trying to say in my own words; I could focus [more] on the musical aspect.” Garbus says that the score project also gave tUnE-yArDs the opportunity to use different musical tools than it had in the past. “And I think that is really showing up on Sketchy, [too], she says.

One thing hasn’t changed a great deal for tUnE-yArDs over the course of six albums, two EPs and more than a dozen single releases: the music’s life-affirming character. “That’s definitely by design,” Garbus says. Though she laughingly points out that “some people listen to [us] and they use words like ‘dissonant’ and ‘ouch’ and ‘abrasive,’ she seeks to make music that not only reflects the truth of life but also “provides some fuel to keep going.”

Allowing that she finds it increasingly difficult to tease apart the inspirations for those twin goals, Garbus says that music that moves and inspires her “has some raw quality ‘where the musician is telling the truth and is also buoyant and energetic – even in the slow songs – and [conveys] a dedication to living.”

Pressed on whether she thinks of herself as an optimist, Garbus re-frames the discussion. “The truth is,” she insists, “it doesn’t matter whether I’m optimistic or not.” She points to signs that among “women of color and Black women in particular, there’s a real culture being grown around transformative justice.” She also cites “a real people-power messaging that is coming through in pop culture.”

Garbus understands – and is comfortable with the reality – that what she and Brenner do with tUnE-yArDs is entertainment. But at the same time she aims a bit higher than that. Way back in April 2015, her group was a featured act at the Big Ears Festival in Knoxville, Tennessee. That even focused squarely on experimental, avant-garde, genre-blurring and generally outside-the-box artists; other performers included Kronos Quartet, Laurie Anderson, Tyondai Braxton and the Bad Plus. Even though much of what she does leans more toward pop, Garbus feels a kinship with those artists.

“I really got into performing through experimental theater,” she explains. Garbus believes that her role as an onstage performer is “not first to make the audience happy and entertain, it’s to challenge them.” That’s the kind of music that excites her as a listener, as well. She aims to create music “that makes your heart beat a little faster and makes you go, ‘What’s going on? I don’t understand!’ It’s music that gives you feeling before comfort, temptation before a feeling of safety.”

That edginess has informed all of Garbus’ work. In her earlier days, “it felt important to be weird,” she says. “It felt important to be experimental and to complicate things and to ‘add a bar here,’ add ‘anti-harmony,’ to make it clear: ‘This isn’t supposed to go down easy.’” But these days, there’s an added tension between all that and a comfort in crafting nice melodies when she wants to. It’s a tension that yields new creative dividends on Sketchy.

And there’s a through-line connecting Garbus’ pre-tUnE-yArDs work with what she’s doing at this moment. Garbus got her start after college as a puppeteer with the Sandglass Theater in Vermont. Days before the release of Sketchy, Garbus appeared on Jimmy Kimmel Live, performing the album track “hypnotized” with the help of a look-alike puppet. So the refreshing weirdness that marked early lo-fi works like Bird-Brains remains at the core of everything Garbus does.

Even though the 11 songs on Sketchy were written before the pandemic began, there’s an eerie, prescient quality to some of the lyrics, a character that offsets the sunnier outlook of other parts of the record. “hypnotized” includes the lyric, “People aren’t anywhere to be found.”

“I don’t know what you call that,” Garbus says. “Uncanny? There were certain things in the air already.”