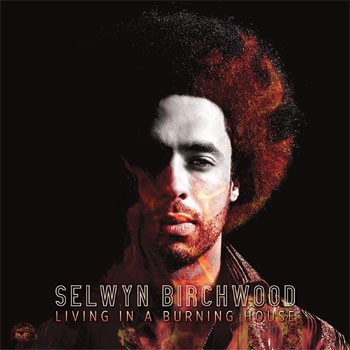 Even before the shrink wrap is off Selwyn Birchwood’s third album, it’s telegraphed that the package represents a more serious offering than what has come before. From its title to the photo of the steely-eyed guitarist, Living in a Burning House establishes a vibe miles away from the youthful, smiling Birchwood of his 2014 major-label debut (Don’t Call No Ambulance) and the playful cartoon cover of 2017’s Pick Your Poison.

Birchwood was no slouch when he first appeared on the scene. Bringing influences from outside the blues idiom, the Florida guitarist played with funky fire. But years of touring and recording have served to sharpen and refine his attack. More than “just” an incendiary electric guitarist, Birchwood is a songwriter; as has been his practice from the start, on Living in a Burning House, he writes all his own material.

Backed by a core four-piece band that includes longtime collaborators horn player Regi Oliver and bassist Donald “Huff” Wright, Birchwood alternates between rhythm, conventional lead and lap steel guitar. And he changes up the vibe in a near-constant shifting of tone. He explodes out of the gate with “I’d Climb Mountains,” rocks hard on the playful “I Got Drunk, Laid and Stoned” and combines funk and subtle reggae touches on the album’s title track.

The songs are solid, connected to the blues tradition but never constrained by it. Birchwood’s approach seems to be to use the blues idiom as a springboard from which to launch his tunes, but his early immersion in rock lends a wide-screen accessibility to his work.

Still, there’s little about Selwyn Birchwood’s style that will put off the more purist-leaning blues aficionados. His playing displays an understanding of the skill-meets-showmanship of legendary players like Buddy Guy, and a winking, cocksure sense of humor pervades his lyrical approach. To wit on the latter: “You Can’t Steal My Shine” features Birchwood declaring, “You can steal my wife, and I’ll wish the best to ya both.”

Most of Birchwood’s lyrics adopt a first-person perspective. Thematically, the songs explore a range of emotions (“Rock Bottom,” “My Happy Place”) and life experiences (“”Revelation,” “Searching for my Tribe,” “Mama Knows Best”) that wouldn’t be nearly as credible had they come from Birchwood a decade earlier.

But it’s possible to listen past the lyrics and focus on the music. And doing that is richly rewarded: a highlight of the rock-solid band is Oliver’s horn work. Layering multiple instruments – baritone, tenor and alto saxophones, piccolo flute – he’s a rich and soulful one-man horn section.

The album is full of subtle touches like the insistent (yet never overpowering nor distracting) wah-wah pedal work that enlivens “Searching for My Tribe.” And “She’s a Dime” works a New Orleans vibe into a tune reminiscent of the Temptations’ 1964 hit “The Way You Do The Things You Do.” Elsewhere, Birchwood’s glockenspiel adds wonderful, understated texture to the soaring “One More Time.”

Now a decade into his recording career, with Living in a Burning House the 35-year-old guitarist may have made his most fully-realized artistic statement to date. But it’s clear, too, that in many ways he’s just getting started.