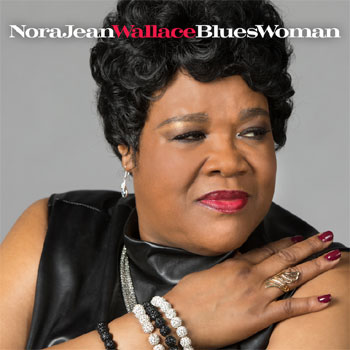 Greenwood, Mississippi born and raised, Nora Jean Dawkins has been steeped in the blues and gospel. Her performing and recording career commenced in the ‘70s and includes a tenure in Jimmy Dawkins’ band. After a decade-long hiatus during which she raised a family, she returned to music in 2002. She went on to release a pair of well-received albums as Nora Jean Bruso, 2003’s Sings the Blues and Going Back to Mississippi in 2004. But then she once again set aside her musical endeavors, taking time to care for her ailing mother. Happily, she returns in late 2020 using her birth name, releasing BluesWoman. It’s quite possibly her most fully-realized work to date.

While the BMA-nominated Going Back to Mississippi remains an enjoyable and engaging listen, Wallace’s new release sounds even more like the work of someone who has lived, loved, lost and endured, and done it all without losing joie de vivre and a sense of fun. There’s a saucy feel to the album’s opening track “Martell” – an ode to fine cognac – that brings to mind jump blues artists like The Treniers and Louis Jordan. And Martell’s husky, growling vocals on the track – joined by a spirited backing chorus – make it clear that while she might be kidding (a little), she’s best taken seriously.

On a reading of Syl Johnson’s “I Can’t Stop,” Wallace’s top-flight ensemble – with guitarist Johnny Moeller and keyboardist Stanley Banks within its ranks – lays down a swampy, Creedence Clearwater Revivial-flavored groove that propels the song.

George Jackson’s “Evidence” was first cut by Candi Station in 1970, but Wallace sets aside the original’s Southern soul vibe, imbuing the tune with a blues feeling that matches its lyrical content quite well. The recording underscores Nora Jean Wallace’s skill at bending the work of outside composers to work with her particular set of vocal talents.

Banks wrote four of the songs on BluesWoman (including the title track) expressly for Wallace, but the vocalist demonstrates her own songwriting chops on four cuts as well. A highlight among these is “Victim,” a languorous blues that breathes life into the “victim of love” lyrical trope; in Wallace’s hands, the idea is visceral and real. Moeller deftly manages the daunting feat of showcasing his chops while making sure never to overshadow the vocalist.

Steve Guyger’s harmonica work is tasteful and exemplary throughout the record, but he steps aside on “Rag and Bucket,” making way for a guesting Kim Wilson. The Fabulous Thunderbirds front man weaves his blues harp’s soulful melodic lines in between Wallace’s phrasing in an effective call-and-response manner.

>Wallace’s original “Look Over Yonder” and “I’ve Been Watching You” explore a Chicago blues style, and even though the latter employs an extended spoken-word introduction – one of several on BluesWoman – even that well-worn device feels genuine in the context of the record. And the r&b stylings of “Dance with Me” show that while blues is Wallace’s foundation – and the idiom in which she’s most comfortable – her abilities extend effortlessly beyond the genre.