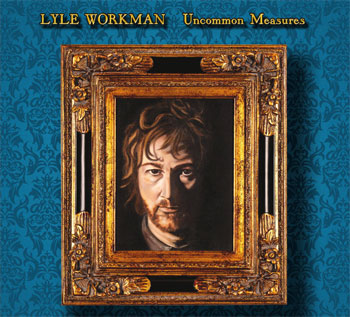 Lyle Workman first came to my attention when he played on Yoyo, the Borgeois Tagg album produced by Todd Rundgren. But he’s done many other things since that have impressed me even more. He was a key part of Rundgren’s Nearly Human album, and he’s all over the second Jellyfish album, Spilt Milk. I wasn’t aware until recently of his work with Beck, Frank Black and others, nor his extensive work for film and television.

Had I known about those things, Uncommon Measures might not have comes as such a surprise. It’s virtually unclassifiable genre-wise, though it draws from orchestral/classical, progressive rock, film score/soundtrack, and good old pop. A grand orchestra is present throughout, but Uncommon Measures rocks consistently as well. Far less pretentious than your typical rock-orchestra hybrid, it’s nonetheless grand and sweeping in its musical scope. And it’s never as gimmicky as late-period ELO (though the essentially instrumental album does intriguingly suggest a road not taken by Jeff Lynne).

The melodies are strong and forceful. The playing is fluid and evocative. The overall feel is immersive, engaging and just plain appealing. I get the feeling that Uncommon Measures might be overlooked by many, but it deserves a better fate. Getting music like this to the notice of those who might appreciate it is no easy task, so if you – like me – find it to your liking, tell a like-minded friend.