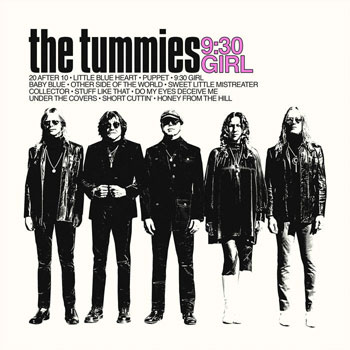 I love beat groups. Cue up anything from early Beatles to obscure ‘60s acts like freakbeat combo the Renegades (you haven’t lived until you’ve heard their cover of Bill Haley and His Comets’ “Thirteen Women”) to – arguably – the Smithereens, and you’ll get my rapt attention. The high-energy, enthusiastic vibe wins me over almost without fail.

And even against that backdrop, I’m knocked for six upon hearing 9:30 Girl, the new album from The Tummies. This five-person act out of Nashville – -no, really – gets all the details right. Driving melodies, snappy, stinging solos, sweet vocal harmonies and obligatory handclaps add up to one of the most consistently enjoyable albums I’ve had the pleasure to discover in recent months.

“Little Blue Heart” sounds like something left off The Beatles’ Second Album, omitted from the soundtrack of Backbeat or That Thing You Do! And it’s a reliable indicator of what the rest of the album sounds like. “Puppet” adds electirc sitar to the mix while still bringing the Who-level punch. The Tummies sound like early Spongetones at their rocking-est; 9:30 Girl conveys the excitement of live music with the polish of the studio.

And they mix it up, too. The title track has a lovely twin vocal, guitars that shimmer acoustically and twang electrically, and wood block percussion that will transport you to the A Hard Day’s Night and Help! soundtracks. The thing is, the Tummies aren’t exactly aping the Beatles – or anyone else – on these tunes; instead they’re applying the values of that sort of music to their original tunes.

“Baby Blue” (not the Badfinger tune) is propulsive enough to begin with, but the insistent tambourine pushes it harder, faster. The character of the songs is nicely varied within the relatively narrow confines of the band’s chosen idiom. The only outlier is “Collector,” a lovely enough song that has an arrangement that shows just a bit of the band’s Nashville identity; it almost feels like it belongs on another album, but the winning vocals (courtesy of front-couple/songwriters Dana Radford and Judd Fuller) tie it in with the other songs on 9:30 Girl.

“Do My Eyes Deceive Me” is swaying Merseybeat a la Gerry and the Pacemakers. “Under the Covers” is American pop country filtered through a Liverpool sensibility, which is another way of saying that it’s a cousin of the Beatles’ “What Goes On?” And the band amps things up – giving the Grip Weeds a run for their money – on “Short Cuttin’.” A brief, acoustic “Honey from the Hill” ends thing on a quiet note, but the overall appeal and power of the album will energize the listener. 9:30 Girl is superb start to finish.