Album Review: The David Angel Jazz Ensemble – Out on the Coast 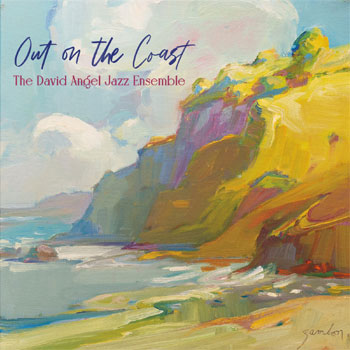 Unless one was an aficionado of the style during its heyday in the 1940s, there was little reason to predict that the form would endure far into the future. It’s doubtful that even hardcore big band fans would have expected it to last into the 21st century. But here we are. Yes, it occupies a minuscule slice of the music landscape, a subset of jazz, arguably the least popular “popular music” form. But despite the odds being against it – cost being a major factor – big band jazz is alive and well.

And some of its most notable practitioners move beyond the tried-and-true method of playing old arrangements of classics (not that there’s anything wrong with that). Some also steer clear of avant garde inclinations and let’s-be-clever approach – both valid pursuits, mind you – and craft new music and arrangements true to the spirit of classic big band music.

That’s the approach of West Coast big band composer, arranger and leader David Angel. His Jazz Ensemble has been around in one form or another since 1969. The current group numbers 13 musicians, and Out on the Coast showcases the band’s skills and accessible nature. More than 15 tracks on the three-disc set are Angel originals; the remainder are standards.

And showcase truly is the operative word here. This sprawling set doesn’t focus on one particular style; it’s delightfully all over the place, from swing to Latin tom more ambitious cool jazz. It’s a timeless set, an ideal selection for jazz and big band listeners who want something new-but-not-too-new.