Boxed Set Review: Iggy and the Stooges – From KO to Chaos 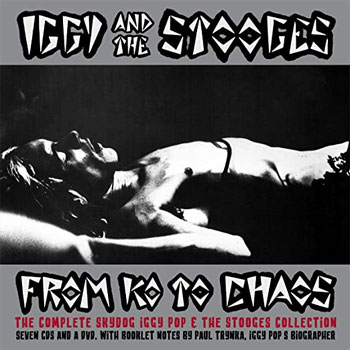 In music fan and critical circles, the concept of “blues police” comes up in conversation from time to time. Simply put, blues police is a pejorative term applied to self-anointed arbiters of What Is And Is Not Blues™. These auto-deputized lawgivers would have us believe that, say, Ana Popovic isn’t blues because she didn’t grow up a hardscrabble life on the Mississippi Delta. And so forth; you get the idea.

Most every genre has its police, though. Americana, jazz, the exceedingly anal-retentive adherents of powerpop … each has a sizable number of fanatics who stand ready to tell you what’s in and outside of the bright lines that delineate their chosen form of musical expression.

Happily, there do exist some things upon which everyone can agree. And chief among those is this: Iggy and the Stooges = PUNK.

It doesn’t even matter, really, which era of the Stooges to which one is referring. Late ‘60s, Elektra Stooges (The Stooges, Fun House)? Oh, yeah; that’s punk. Raw Power-era Stooges? Punk for sure, even with the confusing mishmash of mixes that exist. Kill City with James Williamson-era Stooges? Punk again, and on green vinyl, no less.

(Here we’ll skip over solo Iggy, though much of it deserves the punk label.)

And at the center of the maelstrom that is Stooges/punk lay an authorized bootleg of sorts, and LP called Metallic K.O. With shitty fidelity and open hostility between band and audience, some might think of it as beloning in a category alongside such gems as Woke Up This Morning and Found Myself Dead, the live document – captured on two-track tape and then stolen – of a 1968 informal jam featuring Jimi Hendrix, Jim Morrison, Buddy Miles and (supposedly) Johnny Winter. It sucks. Don’t look for it.

But when it comes to punk, lo-fi can arguably be said to be more in line with the prevailing aesthetic. And the circumstances under which the Metllic K.O. shows took places makes the recordings of historical importance.

Metallic K.O. wasn’t the easiest LP to find back in the day. I had a friend who owned a copy. I was a mere teen when I first heard it, and I was appalled. When my crappy garage band recorded itself on a portable cassette player, the sonic results weren’t all that different (though the visceral danger of the Stooges’ performance was largely absent from our own suburban aesthetic).

The original LP was in fact a compilation sourced from two shows, one in February 1976, the other October of that year, both at the Michigan Palace. In part, it’s a document of Iggy Pop taunting (and being taunted) by a menacing, malevolent audience. Sounds like fun, right? Iggy responds by leading the band into a marathon “Louie, Louie,” a gambit not exactly designed to soothe the savage beasts.

But it sure is punk, and the band roars.

Fast forward a whole bunch of years. This new boxed set aims to establish itself as the final word on the whole Metallic K.O. episode. It does so by serving up eight discs. The first is the original album in all its lo-fi glory. The second presents the unedited tape of the October set, remastered and speed-corrected. The third CD features the entire February show with the same improvements.

Disc Four – appropriately subtitled We Are Not Talking About Commercial Shit serves up rarities from the period, including covers of the Velvet Underground, the Animals, ? And the Mysterians, Frank Sinatra(!), Sly and the Family Stone the Kinks and more. The sound quality? Often shitty. The performances, pretty great, for the most part. Plenty of sparring between Iggy and the band, too. The studio tracks are a bit iffy; you’ll likely understand why the cover of “Family Affair” wasn’t released; it sounds more like a parody of Roxy Music than anything else.

But there’s more. Lots more. The fifth disc in this box, Wake Up! Suckers draws from London session in’72, more Detroit gigs from 1977, some scattered ‘80s cuts and a few tunes produced by The Cars’ Ric Ocasek. Some of it is fiery, some almost pedestrian. The Ocasek stuff is pretty dreadful, and it does little to burnish the reputation of any of those involved.

For some reason, Disc Six is titled Acoustics KO. It’s a DVD including two solo Iggy performances – 1990 and 1993, both in Europe – seated, singing and playing left-handed guitar. The first – indeed an acoustic set – couldn’t be much more different from Metallic K.O. but it’s pretty great, showing as it does a wholly different side of Iggy. Its conceptual connection to the first three audio discs is tentative, but it remains worthwhile. The second is a dodgy VHS transfer of a single-camera shot and features Iggy on lefty Gibson SG; it’s more more in line with the Stooges material, and is essential viewing. It’s punk as fuck, one might even say.

The seventh disc is audio again, and also titled Acoustics KO. It features all different music form the acoustic portion of the previous DVD. Unhelpfully, the thick booklet provides no details regarding its provenance. If you’re still with us, it’s a studio session, not live. Iggy’s in fine voice and plays superbly.

The eight-disc set reaches the finish line with Telluric Chaos. It’s a document of a March 2004 show in Tokyo before an adoring crowd. The band features Iggy plus the Asheton brothers, Mike Watt on bass and Steven Mackay on sax. On this night, nearly thirty years have passed since those Detroit shows. But the band tears into the music without sentimentally or nostalgia (though the audience doubtless has plenty of both). It’s true to the punk spirit of the original, and the audio quality is a helluva lot better. And it sure as hell is punk.

Though a few of the discs are inessential at best, when From KO to Chaos is at its best, it’s required listening. Verdict: a worthwhile if flawed collection with a price tag tat justifies its purchase.