Note: This story started as an assignment for Mountain Xpress about one artist — Chris Tullar — and grew into a larger story looking at a wider range of creatives local to Asheville. — bk

The ways in which creatives deal with the challenges posed by the COVID-19 pandemic vary widely, but many of them serve not only to entertain, but to inspire. Here’s a look at three Asheville-based artists and their approach to what current times have brought us. 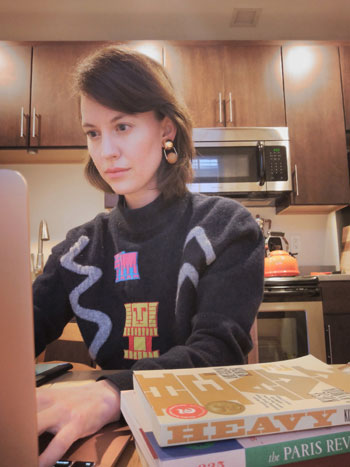 Bonnie Antosh: Embracing the fantastical
Bonnie Antosh is an actor, literary manager and playwright who – in normal times – is based both in Asheville and New York City, a concept she jokingly calls “dual citizenship.” But since the pandemic began, Antosh – who was born in Spartanburg, S.C. but grew up in Brooklyn – has stayed put in Asheville and Spartanburg.

That decision was initially a creative one. “I came back to the Carolinas because I wanted to interrogate a few of the seductive and terrifying contradictions that exist in the many Souths,” Antosh explains. But COVID-19 was an unavoidable factor as well; staying here is now “a practical decision about safety for myself, my neighbors, and the people I love,” she explains.

Time was, Antosh could often be found at Odd’s Cafe in West Asheville, a place she describes as “my office in spirit. There was a wonderful community of regulars there, and we all generated a hum of noise and life around each other.” And while she expects to return there when it’s responsible to venture out in public, for now she’s ensconced at home, and outdoors when it’s practical to do so.

As a playwright, Antosh finds herself thinking more about the challenges of that medium in a COVID and post-COVID world. “I’ve been thinking a lot about why audiences do or don’t go to the theater,” she says. She asks herself, “How can the theater feel simultaneously more accessible and more itself, in terms of what it can offer in conversation with other spaces of culture” like movie theaters, bars or even basketball games?

Antosh endeavors to address that and other open-ended questions in her plays; she believes that a “sense of imaginative, generative conspiracy” can be key. “So I’ve been writing a lot of unbelievable and fantastical elements into my plays: time jumps across centuries and continents, animal puppets, songs in dead languages, characters who can see the future.”

Since the pandemic began, Antosh has authored two plays. One is Lemuria, which she describes as “an inheritance drama about queer anthropologists. Think a very loose, playful adaptation of King Lear, set in a North Carolina lemur research lab.” The other, I Told You It Would End Like This, was co-written over GoogleDocs and Zoom with Avery Deutsch. “That one’s a re-imagining of the Cassandra and Trojan War myths,” Antosh says. She has also written a short play to be performed via Zoom.

Quarantining has made Bonnie Antosh more productive, she says. Commitments and deadlines explain some of it, but at its core her productivity is a coping mechanism. “Write for many hours, make sure other artists and neighbors have resources to survive the pandemic, use routine to travel from one day to the next,” she explains. “And then repeat.” 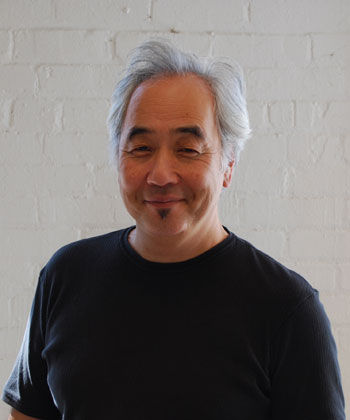 Akira Satake: Online Convergence
Like many artisans, Akira Satake’s creative rhythms suffered an interruption in March 2020. “My overseas workshops, including Tuscany and Barcelona – got canceled,” says the ceramicist. “And then the domestic workshop and exhibit were also canceled.” At first, he panicked, but then centered himself and began to think about the future.

“This is a time for me to focus, to create something very new, a little bit more adventurous,” he decided. “I thought that would be kind of a wonderful idea, because I always wanted to have a little bit more time to focus on my art.” But he felt a responsibility toward the people working for him: three assistant, two gallery staff, and his wife.

“I have one year to focus deeply on my art,” he decided. “But I have to make sure [they] can make a living.” So with his gallery in Asheville’s River Arts District closed to the public, he shifted to online sales. “We put out 500 pieces of work,” Satake says. “And I did everything I can do to let the people know.” Between his mailing list and social media, he was able to reach a wide audience. “And surprisingly,” Satake says, “That did well.”

He also decided to be adventurous, launching Convergence, an online workshop in collaboration with Ken Matsuzaki, a potter based in Japan. “We sold out our workshop in four hours,” Satake says, the amazement clear in his voice. The three-day, nine-hour workshop attracted students from around the globe.

The success of Satake’s online sales and Convergence workshop may or may not point the way toward his post-pandemic future, he admits. “The experience really opened up the possibilities,” he says. “But I don’t want to be too busy, too stressed out for the next year. I like to progress every moment, and if I’m too busy, it’s not good.”

He was even able to negotiate with his landlord to acquire a significantly larger space. “Right now, I’m not making money from that studio, but I’m preparing,” he says. “When this pandemic is over, I have a much better place to do workshops or concerts or exhibits.”

His new ventures – and their effectiveness at allowing him to keep his staff employed – give Satake increased optimism about what may lie ahead. “Nobody had to go,” he says. “I think we got even better as a team after we went through this time together.”

Satake doesn’t want people to misunderstand his situation: “Oh, Akira is doing great!” He explains that when a difficult circumstance presents itself, he tries to “come up with some way to make it positive instead of worrying or complaining.” Asked if the darkness of current events shows up in his work, Satake is emphatic. “No,” he says. “I’m a very happy guy.” 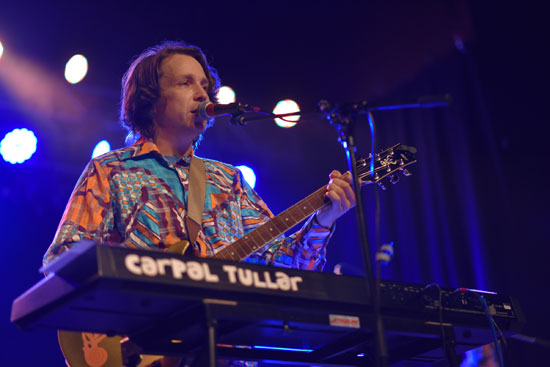 Some artists labor over the creation of a new album for years, tinkering endlessly with the results. Others – like Robert Pollard’s Guided by Voices – seem to record and release every musical idea they have. But Tullar takes a more unhurried and stress-free approach.

“I tend to come up with a random assortment of things, so nothing ever really seems like very cohesive,” he says. “To be completely honest, I get to 40 minutes [worth of music] and I’m like, ‘Okay, that’s enough.’” But that description belies the quality of the music created under the Carpal Tullar banner.

Back when live performances were a thing, Carpal Tullar gigged regularly around town. And that lineup – featuring Tullar, guitarist/keyboardist Dave Baker, bassist Rob Heyer and John McKinney on drums – expects to return to live shows in the future. But when it comes time to make albums, Tullar tends to work alone. “I’m a little bit of a control freak, maybe,” he admits. And Most of Ore was recorded before the pandemic began. “All I really did during the pandemic was mix it,” he says.

Tullar created a video for one of the album’s standout tracks, “All These Love Songs.” But miscommunication between the CDBaby platform and YouTube resulted in the latter entity flagging the original song for alleged copyright violation. “YouTube says, ‘You can’t monetize this video,’ which is fine,” Tullar says with a chuckle. “Because I don’t do that anyway. What am I going to get? Twenty cents?”

Meanwhile, Tullar is already at work – alone again, naturally – on his next album. But he doesn’t know what it will sound like. “I kind of enjoy the unknown,” he says. “That’s when I’m most creative.”