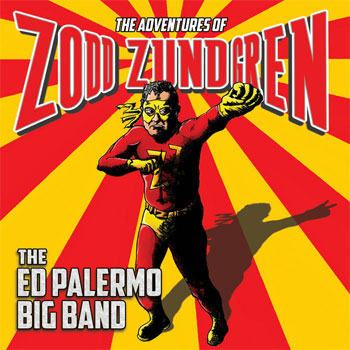 Frank Zappa’s body of work is massive. Even if one limits oneself to the music released during his lifetime, it’s a lot. Me, I have his first 45 or so albums on vinyl, and scattered post-vinyl-era releases as well. And for those who appreciate his work, it’s possible to focus on specific styles and/or eras while skipping over the ones that perhaps don’t resonate quite as much. Hey, it’s nearly all great, but some of it is … difficult (however you choose to define that word).

Speaking for myself, one of the periods of his work that I find the most appealing is the late-Warners era, a period marked by battles between him and his label regarding what was released and what was not. Though they’ve since been recompiled into a massive work called Läther, a trio of albums from the late’ 70s – Sleep Dirt, Studio Tan and most importantly Orchestral Favorites – find Zappa exploring (among other things) the big band idiom.

I mention this because that approach – also the central characteristic of 1972’s The Grand Wazoo – is one that has been picked up by Ed Palermo. The NYC-based guitarist and bandleader is a kindred spirit of Zappa’s, with an approach that deftly balances the irreverent and wacky with serious and highly accomplished musicianship and arrangement chops. Palermo has made a career of applying that dual sensibility to big band treatments of the work of others.

Now, The Adventures of Zodd Zundgren was released in 2017. I recall hearing about it at the time, but because (a) a review copy never landed on my desk and (b) I was quite busy with other things, I never actually heard it. So when a CD showed up at Musoscribe World HQ in early January 2021, I was quite ready to check it out.

As its title suggests, Adventures explores the musical nexus in which the musics of Zappa and Todd Rundgren coexist. The album deftly combines – in back-n-forth fashion – compositions from both composers. But what it also does – and this is even more remarkable – is smash together the more musically challenging pieces with lovely ear candy melodies. While Todd Rundgren has long been admired for his ability to create both kinds of music, Zappa gets far less credit in that regard. He deserves it, though, as Adventures so brilliantly illustrates.

From the opening a cappella snippet of “Absolutely Free” to the end, Adventures is a delight, a musical roller coaster ride through the catalogs of both artists. The material is recast into the big band style, and almost completely without fail, it works beautifully. And Palermo digs deep, giving Nazz-era songs the treatment, too. The album is mostly instrumental, and tunes like Rundgren’s “Influenza” and Zappa’s “Peaches en Regalia” simply soar, new life breathed into tunes that were already vibrant and enduring.

A scat vocal reinvention of Zappa’s “Echidna’s Arf (of You)” is sublime; even though my tastes don’t typically extend to Swingle Singers-type vocalese, this version of the instrumental work has me rethinking that perspective. And when I encountered Palermo’s cover of Something/Anything? track “Breathless,” my first thought was, “Uh-oh.” Would he include the part of the song that Todd, er, borrowed from Vince Guaraldi? No, he would not, thank goodness.

The see-saw Frank/Todd sequencing fails exactly once, in my view. While the vocal pieces (many featuring the estimable Napoleon Murphy Brock, veteran of many Zappa sessions) are mostly a delight, a reading of “Emperor of the Highway” falls flat. It was overly cutesy to begin with, an exercise in stagy, Broadway-type music that never resonated with me. And the remake doesn’t take the tune anywhere new; instead it doubles down on that approach. For fans of the tune (and of 2nd Wind and Up Against It), the track may provide some enjoyment. For me, not so much.

But that track is an outlier, prominent only because everything else here is so damn good, so incredibly well thought-out and seamlessly executed. For listeners who might find themselves or put off by the quirkiness of Todd’s and or/ Zappa’s music, The Adventures of Zodd Zundgren could well serve as an entry point into their weird and wonderful worlds. And it’s a great place to start digging into Ed Palermo’s body of work, too.