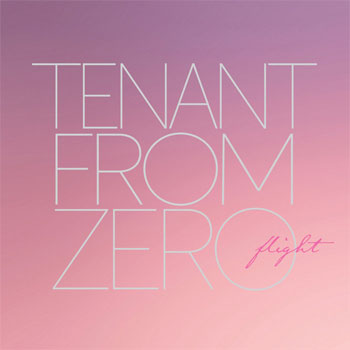 With a sound halfway between late-period Roxy Music and ‘90s triphop/chillwave/downtempo a la Massive Attack and Zero 7, Brooklyn-based Tenant From Zero makes moody, hauntingly romantic music for the ages. The arrangements on Flight are nicely balanced between spare and lush aesthetics. Buttery fretless bass lines, shimmering keyboard textures, subtle, understated percussion and the soulful vocals of songwriter Paul Darrah add up to an alluring whole.

The album’s accompanying press materials cite similarities to Prefab Sprout, and that connection can indeed be heard strongly in tunes like “The End Away,” with its creamy female backing vocals and understated horn charts. There’s little about Flight that marks it as a 2020 release; its sonic connections are much more firmly rooted in sophisticated pop of the past, but the album still feels fresh somehow.

Listen closely to “The Bomb You Dropped” – with its keening violins and alluringly dissonant keyboards – and see if you’re not taken back to Roxy Music’s first single, 1972’s “Virginia Plain.” TFZ doesn’t steal from the song so much as conjure its sound and vibe, applying it to a wholly new composition. This kind of borrowing is admirable when it’s done in such a creative manner.

Tenant From Zero isn’t a band; it’s the working name for Darrah’s recording project. But the album – recorded in Norway and Brooklyn – features instrumental support from members of Ladybug Transistor, Ariel Pink and others. Anyone who luxuriates in the sounds of Avalon, Two Wheels Good (Steve McQueen if you’re in the British Isles) and similar efforts will find much to enjoy in the nine tracks on Tenant From Zero’s debut release.