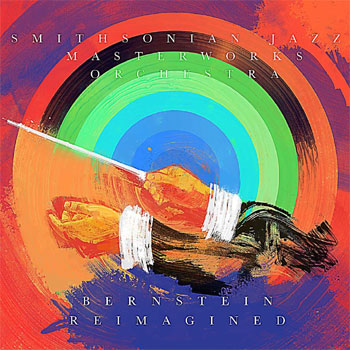 Established in 1990, the 17-member Smithsonian Jazz Masterworks Orchestra is the orchestra-in-residence at the National Museum of American History. Though it’s primarily a live act, since its formation the Orchestra has released at least six albums. The newest is Bernstein Reimagined, in which the Orchestra (under the baton of conductor and alto saxophonist Charlie Young) delivers big band arrangements of classic works from the pen of composer Leonard Bernstein.

These pieces were originally designed for the stage, so they’re sweeping and evocative. And though they were often written to help emphasize the onstage and/or onscreen visuals, in the hands of the SJMO, it’s clear that they stand on their own as well. Selections from the 1949 Technicolor musical On the Town and one written for (but cut from) the 1950 musical Peter Pan are among the highlights, but Bernstein’s 1955 “Symphonic Suite from On the Waterfront” is the centerpiece of this set.

Each of the ten pieces features at least one soloist; “Meditation #1” from Bernstein’s 1971 slightly controversial Mass and the On the Waterfront suite have three, and “Times Square Ballet” from On the Town has four. And while in their original forms, these pieces weren’t really jazz, they translate remarkably well to the form. As Flavio Chamis writes in his superb liner notes for the CD, “This project falls directly between [symphonic jazz and jazz symphonies] and becomes a third thing all its own, that sheds light on both. That sums up Bernstein Reimagined better than anything. Highly recommended.