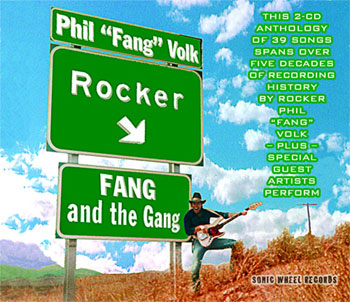 Phil “Fang” Volk is best known as bassist for Paul Revere and the Raiders during their most high-profile era, roughly 1965-67. That’s him – the long-running group’s fourth in succession of bassists – you hear playing bass on essential cuts like “Steppin’ Out,” “Kicks,” the original version of “(I’m Not Your) Steppin’ Stone,” “Good Thing,” Hungry” and singing his own composition, “In My Community.” Longtime readers of this music magazine will know that Volk left the Raiders to form the ill-starred and unjustly overlooked band Brotherhood, along with fellow ex-Raiders Mike Smith (drums) and Drake Levin (guitar).

After Brotherhood failed to launch – a story fully chronicled in my ten-part feature that also served as the liner note essay included in the only authorized Brotherhood reissue – Volk went on to lesser-known musical pursuits, often with his wife (and former Where the Action Is! co-star) Tina Mason. Some of those bands – a mega-group named to reflect Volk’s spiritual leanings (Great Crowd) and the six-person Friendship Train – recorded music, but they lacked even the abortive label support afforded to Brotherhood.

After taking part in a ‘60s rock-pop alumni group The American Rock All-Stars with Keith Allison and former members of The Grass Roots and Buckinghams, Las Vegas-based Volk formed Fang and the Gang. That group performed live occasionally and is featured on the self-released 2004 CD Fang Reveres the Raiders.

Along the way, Volk amassed a cache of personal recordings, and in early 2020 he concentrated on an additional batch of material recorded in his home studio. A new 2CD release, Rocker, serves as a compendium/sampler of music from those sources.

The first disc in the non-chronological collection features material Volk cut with former bandmate and lifetime friend Levin before the latter’s 2009 death (“Blue Revolution”), a Great Crowd remake of the Brotherhood track “Don’t Let Go,” and a number of more recent recordings. A live cover of Little Richard’s “Lucille” finds Fang and the Gang in comfortable nostalgia revue territory, sounding quite a bit like the late-late (Branson, Missouri) era Raiders.

Somewhat strangely, the disc also includes “Family Tree,” a track from Brotherhood’s second LP (1969’s Brotherhood Brotherhood) with additional guitar and vocal overdubs made in 2018 and 2020. While it may have sounded like a good idea to add to the original, the result is muddy and cluttered, sounding like nothing so much as musicians playing and singing along while a record spins.

Better (and more well-advised) is a 2019 remake of another Brotherhood tune, “Doin’ the Right Thing.” That 2019 recording features an arrangement vaguely reminiscent of Bob Seger’s Against the Wind era material. A 1983 cover of the Goffin-King classic “Will You Love Me Tomorrow” features Tina Mason on lead vocal; the recording sounds of its era, with a rocking arrangement reminiscent of Patty Smyth’s Scandal.

But the undisputed highlight of the first disc is Great Crowd’s “All Over, No Wonder,” featuring an impassioned Volk lead vocal and a stirring, soaring arrangement punctuated by horns and brief bursts of lead guitar. It’s easily the best recording Volk has shared from his post- Raiders and Brotherhood periods. The song’s religious themes may not be every listener’s cup of tea, but the song itself is an undeniable achievement.

Rocker’s second disc is as varied as the first. An ersatz ‘50s reading of the Beatles’ “I Saw Her Standing There” is well-executed but ultimately pointless. A Volk original from 2019, “Allison” feels like oversharing and may leave longtime fans a bit unsettled. (Volk’s semi-cryptic liner notes don’t help in that regard.) Tracks by one Kelly J. (Volk’s protege circa 2008) might seem out of place, but with multi-instrumentalist Volk leading the session, it makes sense within a goal of providing a fuller picture of his body of work. His own “I Appreciate Your Company” from 1995 is a pleasing slice of country-pop.

Fans of Brotherhood will want to hear “Colorful Day,” a recording from the band’s 1967 sessions that features the band’s original lineup of Volk, Levin, Smith and keyboardist Ron Collins. Happily, there hasn’t been any latter-day post production fiddling with the track; had Real Gone Music’s The Complete Brotherhood Collection allowed for the inclusion of bonus tracks, “Colorful Day” would have been included.

Longtime fans of Phil Volk’s music will find Rocker essential; the two booklets included in the set feature extensive annotation and present-day comments from the artist, plus loads of color photographs. Those whose primary interest in his work centers around his Raiders and Brotherhood era will gravitate toward the vintage rarities from the ‘60s, 1970s and early ‘80s.