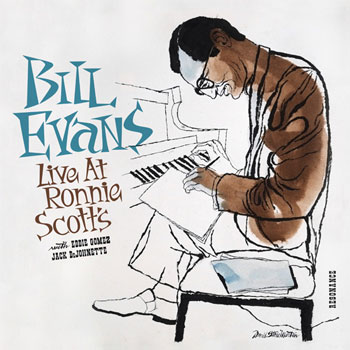 Perhaps the most celebrated lineup of the Bill Evans Trio is the one featuring bassist Scott LaFaro and drummer Paul Motian. Sadly, and because of LaFaro’s death in an auto accident, that lineup would be documented on but two albums, but what great albums they were.

Nearly as acclaimed was a later trio featuring Eddie Gomez on bass with drummer Jack DeJohnette; that lineup is documented on 1968’s Bill Evans at the Montreux Jazz Festival. And until now, that Grammy-winning LP was the only recording of the short-lived (six months) lineup. Recorded days after the Montreux performance and residing in the personal archives of DeJohnette, Live at Ronnie Scott’s provides more evidence of the often transcendent heights to which this trio could soar.

With pleasing sonic fidelity this new 2CD release more than triples the amount of music we can now enjoy from the Evans-Gomez-DeJohnette trio. And in fact – though they were mere weeks apart – there’s quite minimal overlap in the set lists from the two gigs. Only Harold Arlen’s “A Sleepin’ Bee,” Miles Davis’ “Nardis,” Denny Zeitlin’s “Quiet Now,” the Gershwins’ “Embraceable You,” and “Someday My Prince Will Come” feature in both sets.

The music that does appear in this collection is in turns exuberant, contemplative, fiery and restrained. One might say that it approximates the range of human emotions worth exploring. And of course it does all this without words. The intimate feel of the legendary Soho club comes through on the recordings, and it’s clear that the gathered audience knew it was witnessing something special; other than enthusiastic applause at the end of each piece, the audience is silent.

Beyond the impeccable taste that goes into all Resonance releases (along with Zev Feldman’s releases on other labels), an enduring and counted-upon quality is the extramusical content. Live at Ronnie Scott’s is no exception in this regard: the period artwork, the package design are first-rate, but more important is the content within the 46-page booklet. Feldman interviews Gomez, no less than a figure than Chick Corea chats with DeJohnette, and Feldman interviews Chevy Chase(!) Elsewhere, music historian Brian Priestly places the recording into the greater context of Evans’ body of work.

There were certainly other Bill Evans albums recorded at Ronnie Scott’s jazz club: 1965’s Live in London, Complete Live at Ronnie Scott’s 1980, Resonance’s own 2019 release of a 1969 set (Evans in England) and so on. But none save this new set features this trio. It’s tantalizing to wonder what other historic and heretofore unheard recordings Feldman has lined up for release, not to mention those which he has yet to discover. But even if by some stroke of tragedy he never brought forth anything other than Live at Ronnie Scott’s, generations of jazz fans would owe him heartfelt thanks.