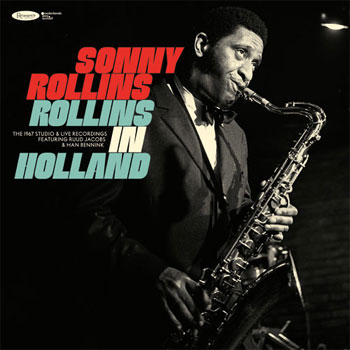 There are people out there doing important archival work. Dedicated music lovers like Zev Feldman connect with archivists, collectors, fans and like-minded individuals across the globe, seeking to unearth previously-unheard recordings by some of the most important figure in jazz. And every so often, we hear these stories of unmarked boxes on dusty shelves, found to contain gems. It’s happened again – thank goodness – and the result is three LPs of wonderment called Rollins in Holland.

The recordings on this set are drawn from studio and live performances, all taking place within the space of three days in May 1967. Backed by bassist Ruud Jacobs and drummer Han Bennink – the same configuration used on Way Out West but with distinctly different personnel – saxophone colossus Sonny Rollins covers the jazz landscape in astounding ways.

The first side of the first LP features four cuts recorded live in the studio in Hilversum, Netherlands. The fidelity is jaw-droppingly pristine, and the trio is on fire. After a lovely sax solo introduction, the three musicians dive headlong into “Blue Room,” following it with an incendiary – yet highly lyrical – “Four.” The remaining two pieces from the session – “Love Walked In” and “Tune Up” demonstrate a level of unspoken communication among the three musicians that is no less than extraordinary. And their musical collaboration balances self-expression with accessibility; there’s nothing abstract or intimidating about these performances.

That evening, the trio played onstage at Academie voor Beeldence Kunst in Arnhem, some 80km to the southeast. That concert is documented on the fourth, fifth and sixth sides of Resonance’s Rollins in Holland. The concert recording provides a study in contrasts with the VARA Studio recording made hours before; the shortest tune runs nearly ten minutes, and two of the pieces – “Three Little Words” and another run at Miles Davis’ “Four” — each exceed 22 minutes, filling entire sides of the vinyl records. By their nature, the concert readings are more exploratory in nature, and they’re filled with clever asides (like a playful snatch of Nat Adderley’s “Work Song” near the end of “Four”). The recording quality of this show is a notch or two below the pristine recordings made in the more controlled environments, but the sonic shortcomings don’t appreciably detract from the enjoyment of the music itself.

The vibe is quite different on Side Two of Rollins in Holland. Playing two days after the other performances, the trio is at the Go-Go Club in Loosdrecht, a small resort town 3km outside Amsterdam. The playing here — recorded for television, the liner notes tell us — is slightly looser and even more spirited, perhaps the result of the quickly-accrued experience gained two days earlier coupled with the welcoming audience feedback characteristic of a club date. The set as documented her includes but two numbers – “Sonny Moon for Two” and “Love Walked In” – but to wish for more seems greedy. These solo-filled performances are sublime.

In 1957 when Rollins cut Way Out West, the sax/bass/drums configuration was something of a revolution. A decade later one might this it would be less so, but there’s still something thrilling and unique about hearing Sonny Rollins blowing with only bass and drums behind him. Though the phrase “behind him” isn’t accurate: this trio is a true ensemble. Though the European musicians were less well-known than Rollins, they hold their own, dazzling during solos, providing sympathetic backing when Rollins blows, and playing as a cohesive unit all the while.

The high standard of Resonance releases is held to here, with an extremely nice triple-gatefold sleeve and a 12×12, 24-page booklet full of the kind of background Resonance fans have come to expect. The essays therein combine the personal, the academic and the just-plain-loving-the-music angles that add up to some of the best supporting material one can find in any record release.