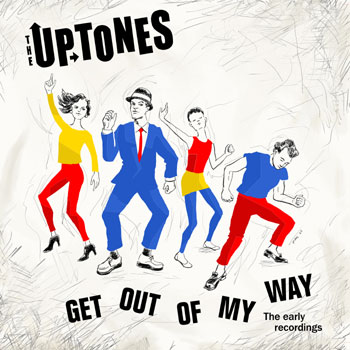 The Uptones
Ska was relatively unknown in the United States when The Uptones got their start. Eric Din – who still leads a version of The Uptones today – recalls that he and a bunch of high school friends formed the group in 1981 to play the kind of music made by UK groups like the Specials, Madness and the English Beat. “One of the key flash points for us was the movie Dance Craze,” he recalls. “It was basically a bunch of concert footage of the English two-tone bands.” But by the time Din saw that film, the ska boom in England was nearly over.

The nine members of The Uptones were into a lot of different styles of music, which added all sort of flavors to their sound. “Some of the guys – especially the horn players – were coming from more of a jazz background,” Din says. “But we just agreed on a lot of things musically. So without really having to write down the ground rules, we knew what they were.”

And even though The Uptones were inspired by British ska bands, they sounded different somehow. “When you try and sound like something,” Din observes, “you don’t.” He says that his group had one especially significant characteristic that set them apart: “We played really fast. Our tempos were amplified by our experience and our energy.” And that energy was infectious, translating into a wildly dancing crowd.

The Uptones grew their audience over time, but Din says that shows were packed from the very start. “First of all, there were nine of us,” he recalls with a chuckle. “Nine high school people with friends is not going to be an empty room.” High energy music coupled with the young band’s mod-based fashion sense was a recipe for success.

The two-tone bands’ message of love and unity was built into The Uptones’ approach. The band was even well-received playing underground shows for hardcore punk audiences. “Our crew would come in dressed mod, and other people were dressed punk,” Din says. “And it was not acrimonious; it wasn’t a gang fighting mentality.” 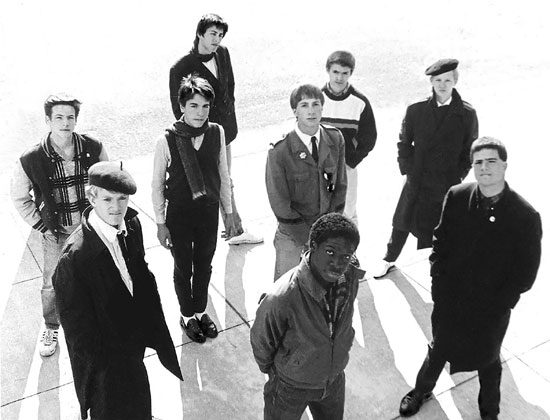 Booked by Bill Graham, The Uptones opened shows for the English Beat, General Public, UB40, Steel Pulse and other like-minded touring acts. But they also opened for Billy Idol at the Oakland Coliseum. “We did okay,” Din says. “But we were used to playing nightclub stages. That was the shortest half hour in my life.”

Din doesn’t think that The Uptones’ local success led to a raft of new ska bands. “But we had some impact,” he allows. “I did notice that some of the pop bands started working some reggae or ska stuff into their material.” Citing the example of a group that was considered at the time to be one of the biggest bands on the planet, Din observes that “The Police had a really big part” in expanding pop music’s scope.  “All of a sudden, it was cool for rock bands to play something like reggae.”

Howie Klein had interviewed the young band on his radio show, and Din says that’s where the conversation about doing a record for 415 began. “But by the time we actually delivered a record to him, it was really the second lineup of the band,” he says. That record – the 1984 K.U.S.A. EP – forms the basis of Liberation Hall’s new Get Out of My Way. The CD adds several previously unreleased tracks documenting the sound and energy of the original lineup. Those demo recordings “turned out to be some of the more definitive tracks of what the group really was,” says Din. 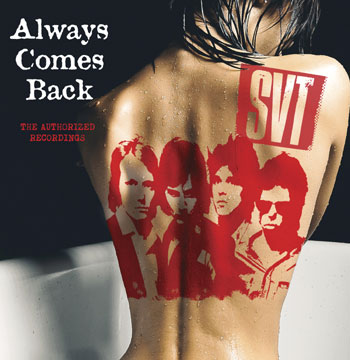 SVT
Bassist Jack Casady had been playing with his best friend, guitarist Jorma Kaukonen since both were in high school. They hit the big time in 1965 with Jefferson Airplane, and went full-time with their side project, Hot Tuna, in 1972. But as the ‘70s neared an end, they decided it was time to take a break from each other, so Hot Tuna went on hiatus.

But Casady still wanted to play. “I called up a friend of mine from San Francisco – a fairly famous lawyer named Brian Rohan – who took care of a lot of bands,” Casady says. “I asked him if he knew of any players, and he gave me a cassette tape of Brian Marnell playing with a band.” Ten years Casady’s junior, Marnell was a singer, guitarist and songwriter of great talent. “I liked his attitude and style right away,” Casady says. Marnell’s music called for a more basic style of bass playing than Casady’s work in Hot Tuna, and that appealed to the bassist.

He got in touch with Marnell, and the two decided to start a new band. And while the group – also featuring drummer Bill Gibson and Hot Tuna keyboardist Nick Buck – booked some of its early dates as the Jack Casady Band, the group’s plan wasn’t to trade on his name. “We slogged our way through many of the clubs and on tour,” he says. “It was always pretty rough.”

The music wasn’t rough, though. While sporting a razor-sharp feel, Marnell’s original songs like “Always Comes Back” (included on the new Still Disturbing the Peace compilation and as the title track of the new SVT collection) showcased a strongly melodic, power pop character. 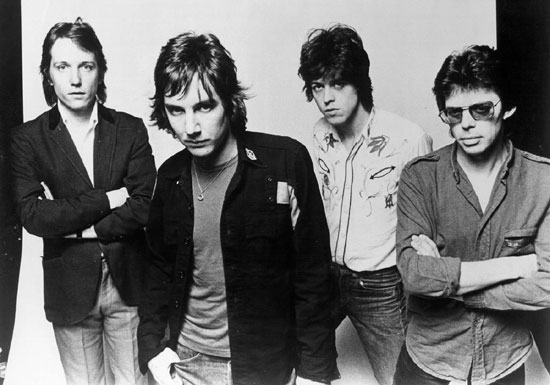 “Brian had a really unique and powerful guitar sound,” Casady says. “I would’ve liked to see Brian develop as an older man – with his thoughts and sense of lyrics developing into a more mature form – but that was not meant to be.” Sadly, Marnell died prematurely in 1983. By that point SVT had released a single (“Heart of Stone”) and an EP on 415 Records, and gone on to make a 1981 album, No Regrets. Liberation Hall’s definitive Always Comes Back includes all of that material plus a handful of other tracks.

Thanks to the key participation of Jack Casady, unknowingly or not SVT provided a bridge between rock’s old guard and the newer, streamlined sounds of new wave. While SVT never broke out nationally, the later success of Red Rockers – perhaps the most commercially successful band to come out of 415 Records – demonstrated that the melodic values of ‘60s rock need not be abandoned in the quest to make compelling rock music for a subsequent generation.

“I just had a sense we were good because we really wanted to be good,” Casady says. “I remember Brian just being so devastated when things didn’t to a fulfillment that he envisioned. After all, I’d been in a very successful, two very successful bands, why couldn’t it happen again?” And although he went on to reunite with Kaukonen in Hot Tuna – a collaboration that continues to this day – Casady admits some disappointment at SVT’s failure to gain more success than it did. “After it was all over and stopped,” he says., “I was bewildered and chagrined by the fact that we couldn’t get any farther than we did.”

415 Records: The Columbia Era
As 415 Records found more and more success, major labels came around with offers to distribute their releases and/or buy them out. After a number of conversations with industry execs – many of whom fit into the worst stereotypes of the era – Klein signed a deal with giant Columbia Records.

“I didn’t want to sign with them,” Klein says today. But longtime friend Pearlman – an industry veteran himself – told him that 415 Records would never get a better offer. Klein laughs as he recalls his thinking. “I said, ‘Well, these guys look like the worst label of all. And if I’m going to do this thing, why do it with someone who’s semi-good? Why not do it with the absolute worst, the most corporate, the most uninterested-in-bands?’”

Klein’s experience with Columbia/CBS bore out his pessimism. “They didn’t give a shit about anybody,” he says. “They would make all these promises, all these plans about a record that was coming out. We would put marketing plans together and then they’d say, ‘Oh, god! We forgot. We’ll get you on the next one.’ These bands put their whole lives into writing these songs; they’re going to be janitors if this things doesn’t happen for them.”

415 Records’ Columbia era did nonetheless see some success for a number of bands, including Translator, Romeo Void and Wire Train (all from San Francisco) and New Orleans-based Red Rockers. But Knab sold his share of 415 in 1985, and by ‘87 Klein joined Seymour Stein’s Sire Records. By that time, Sire – a label that had shepherded punk and new wave acts like the Ramones and Talking Heads to success – had its own distribution deal with Warner Music Group. In 1989 Klein was named General Manager at Reprise Records in Los Angeles; Pearlman bought 415 Records and changed its name.

40 Years On, Still Disturbing the Peace
Much of the pre-Columbia releases on 415 Records went out of print years ago. But recently, archival label Liberation Hall launched a campaign to reissue music from the San Francisco label’s earliest days. Headed by former Rhino Records executive Arny Schorr, Liberation Hall focuses on rescuing worthy music from obscurity.

“Because everyone involved with Liberation Hall is an ex-Rhino,” Schorr says, “that ethos of honoring artists from the past continues with what we’re doing now.” Beyond the 415 Records stable, other acts getting the reissue treatment include the Blasters, Phil Ochs and San Francisco’s own Flamin’ Groovies.

“Part of what I enjoy most about this project is working with the artists,” Schorr says. He admires “their enthusiasm to put their music back in the hands of old fans, and exposing them to new fans.” When possible, he includes bonus material on the expanded reissues. Acknowledging that the details sometimes pose a challenge, he says, “motivating them to find elements and to understand our marketing plan and time constraints was a challenge. But getting letters and phone calls thanking us for putting these out made it all worthwhile.” Schorr hopes to release more music from other 415 Records artists.

The music showcased on the 415 Records reissues and compilations captures a specific moment in time, a period when the San Francisco punk and new wave scene was wide open. It had yet to be co-opted and watered down by major label involvement. “There was no real [genre] definition at the time,” Klein says. “People were still trying to figure out what’s punk, what’s new wave. At the time, people were defining Tom Petty as punk rock!”

And the new reissues document music made at a time when it seemed that anything was possible. The recordings capture the spirit and energy of venues like the Mabuhay Gardens in 1980. “it didn’t really matter who was playing,” Klein says. “It was just a scene.”