Book Review: That Thin Wild Mercury Sound: Dylan, Nashville, and the Making of Blonde on Blonde 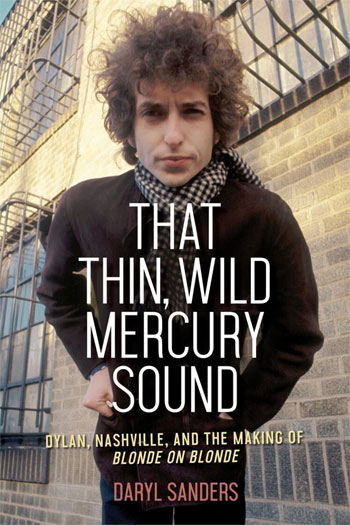 One of the most confounding and inscrutable of all artists, Bob Dylan and his body of work defy simple descriptions. Of course that hasn’t stopped journalists, academics and critics from trying. There’s no telling how many books and articles have been written about Bob Dylan and his music. But if a dedicated and thoughtful writer-researcher were to sift carefully through that mass of relevant material, the possibly at least exists that a clearer picture of Dylan’s work might be pieced together.

And that’s precisely the approach employed by Daryl Sanders as he takes on one of Dylan’s most important and formidable works, the 1966 double-LP Blonde on Blonde. The third in Dylan’s series of mid-’60s rock-oriented albums, it represented Dylan at his creative peak (or at least one of them).

Drawing on deep research, Sanders endeavors both to sketch out the history of the album’s creation, and to color inside those lines through analysis (and distilling the analysis of others). Designed as a history for the reader interested in Dylan’s creative output, That Thin, Wild Mercury Sound is not exactly a scholarly book; it’s written in an accessible style. But the approach to assembling the story does approach the level of scholarship: in that sense, it’s the best of both worlds.

Sanders quotes several authors throughout his thoroughly-annotated volume. But significantly, he places more weight and emphasis on the approach of drawing from interviews and pieces written closer to the time of the album’s release. And by carefully sifting through those written bits and pieces, he builds a cohesive narrative in the manner that one completes a jigsaw puzzle. Early on, the individual segments don’t seem to have much connection to one another, but as the project continues, a coherent image begins to take shape.

Much from the extensive archive of Blonde on Blonde session tapes has found its way into official release in the years since the record’s debut, and Sanders digs into those recordings to gain greater understanding of the way the music evolved. And he goes light on the analysis himself, instead laying out the evidence and clues in a way that allows the reader to develop his or her own personal perspective. And because of the resolutely oblique nature of Dylan’s lyrics, that’s the only reasonable approach.

But That Thin, Wild Mercury Sound isn’t simply about Bob Dylan’s words. There’s plenty of insight into the story of how the music came into being. The important figures who played roles in the making of Dylan’s ‘66 masterpiece each brought their own creativity to bear upon the project. Even though Blonde on Blonde is resolutely a Dylan work, it simply couldn’t have been what it is without the input of Robbie Robertson (of The Hawks, later The Band), producer Bob Johnston, Al Kooper and – significantly and most importantly – the Nashville session musicians who played on the sessions.

And it’s that Nashville connection that makes Sanders an ideal writer to take on the making of Blonde on Blonde. Sanders is based in Music City, and has a keen knowledge and understanding of Nashville’s place in the world of music. In the pages of his book, he places Blonde on Blonde and Bob Dylan into a Nashville context: how the city colored the tone and character of the album, and how the album left a mark on the city. For those who wish to go beyond simply listening, his book makes a superb companion to Blonde on Blonde itself.