He Wrote That Song, Too: A Conversation with Steve Dorff (Part One) 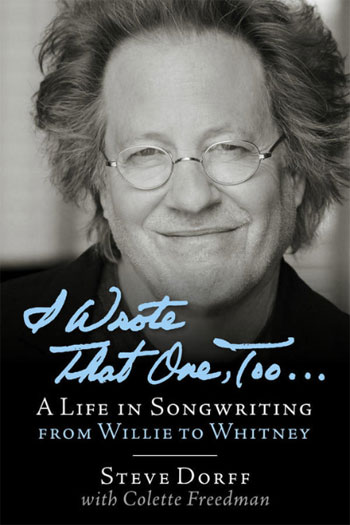 Even if you follow popular music very closely, you may not be familiar with Steve Dorff. But it’s almost certain that you’ve heard his music. That idea – that his relative anonymity stands in contrast to the high profile of his work – spawned his 2017 memoir, I Wrote That One, Too: A Life in Songwriting from Willie to Whitney.

Dorff has more than 20 Top Ten hits to his credit. He’s scored for film and television, and in 2018 he was inducted into the prestigious Songwriters Hall of Fame. His songs have been recorded by Garth Brooks, Ray Charles, Cher, Judy Collins, Celine Dion, Whitney Houston, Anne Murray, Dolly Parton, Smokey Robinson, Kenny Rogers, Blake Shelton, Dusty Springfield, Ringo Starr, George Strait and Barbra Streisand. And that’s just a partial list. Eddie Rabbitt’s “Every Which Way But Loose” is among his most well-known tunes. But there are many, many others.

In February, Dorff was gearing up for a solo songs-and-stories tour; I spoke with him ahead of those dates, all of which were of course canceled in the wake of the pandemic. Understandably, the planned print feature was canceled as well. But our conversation was an enlightening one, so I’d like to share it with Musoscribe readers nonetheless.

In your book, you talk about your innate ability to focus on, and discern, the individual parts in orchestration or arrangement. As you became a songwriter, did that lead to you conceiving songs with the arrangements in full, or did you build them piece by piece?

Do you find that the finished recorded product generally stays fairly close to that? Or does it go off and take on a life of its own?

That’s a great question. It depends on whether I’m producing it or arranging it. Or sometimes an artist that I don’t know will record the song, with a different producer and a different arranger. Then, of course, there’s always some surprises: the chords or the voicings might change. In some cases, the melody might drift a little from the original intent. So, I think it depends on who’s behind the wheel, you know?

You’ve written both alone and as a collaborator. What challenges does co-writing present, and how do you work through potential conflicts?

For me, there have been very, very little co-writes that have had any conflict, whatsoever. Probably, because I choose to write with people that I know, and that I know their work, and we have a friendship of some kind. I very rarely co-write with someone I’ve never met, or don’t know something in pretty good detail about.

Has there ever been a time when a performer has taken one of your songs in a direction that you didn’t especially want it to go?

Yes. The answer to that is yes. It’s happened several times. It’s not the norm, though. I think most people who have recorded my songs have listened to the demos that I’ve made, and that’s the reason why they love the song. They want to spend their time and effort in recording it because they love the song as it exists. There have been some wild, crazy arrangements done on a few of my songs where I just said, “What in the world is that all about?” But, hey, I think that happens to everybody.

From your standpoint – and not just with regard to your own work – what are some of the defining hallmarks of a great song?

I think there are three elements. [One,] there’s a tune or a melody that gets into people’s heads, and they can’t stop singing and humming it. Even the non-musician, or the person that doesn’t know music at all gets that hook in their head, that musical hook. [Two,] A lyric that speaks emotionally to the listener. And then [three,] I always say – at least what makes it for me – in my career, the biggest hits have been the songs that are the most relatable. Bob and Mary in Iowa, listening to a song: “I crossed my heart and said, ‘I want to get married to that song… That’s our song.]” So, I think relatability, great musical hook, and an emotional lyric that speaks to the listener: those are the three elements of a hit song.

I’ve spoken with songwriters who describe part of their brief as “emotional manipulation.” The songs are designed to elicit a specific emotional response. Do you sometimes approach a song with the idea that you really want to conjure a specific set of emotions on the part of the listener?

I don’t think I consciously do that until I’m well into the song. My process has always been [that] I’ll hear a piece of a melody – or someone will say something that strikes a musical chord in me – and I just start writing the song. Not worrying about, necessarily, what to say specifically that will appeal to a certain person or group of people like that. I just kind of subconsciously write songs. I guess I rely on my experience, because most of my songs do come from life experiences, that those will be relatable to other people. I don’t think I sit down and say, “I’m going to write a song about people that love the color blue.”