Album Review: Wipers – Is This Real? 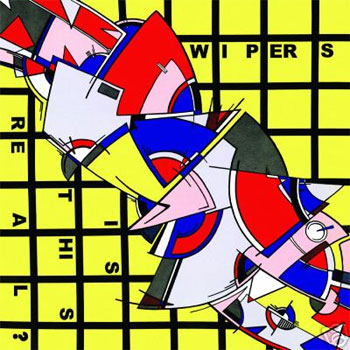 Often held up as the first punk band of consequence from the Pacific Northwest, Wipers (no article; just Wipers) played against type and – unlike so many others of the genre – held together (more or less) for more than two decades. And even more atypically for punk, Wipers maintained a high level of quality all the way through to their end.

But it all started with a 1977 LP called Is This Real? If you’ve listened to the first Ramones album, Sex Pistols and L.A. hardcore then you will find Wipers’ debut enjoyable. They play fast and tight, and the spirit and determinedness of the music makes its mark.

It’s easy to focus on the vocals and guitar work of Greg Sage, but Wipers’ rhythm section was a force to be reckoned with. In particular, Dave Koupal’s sinewy bass lines suggest a background as a lead guitarist. He doesn’t overplay – this is punk, after all – but his role in Wipers isn’t miles (and miles) away from that of John Entwistle in The Who.

Sage’s songwriting – his choice of chords and whatnot – displays a sophistication that pushes at the edges of punk, leaning tentatively toward mainstream (in a good way) rock. Put another way, there’s nothing on Is This Real? as lunkheaded as “Sheena is a Punk Rocker.”

But don’t assume from that the idea that Wipers were sellouts. “Up Front” is as uncompromisingly punk as anything you’ve ever heard. It just happens to have a superb bass line and a note-perfect guitar solo complete with sonic dive bombs.

Contemporary reviews of the original LP remark negatively upon its production quality. I’ve never heard the original so I can’t comment on that. But for this reissue, Sage himself remastered the album from the original tapes, and it sounds just great.

This new reissue from Jackpot Records reproduces the high gloss, metallic sheen album cover, presses the album on clear vinyl, and features a bonus 45 r.p.m. EP of four-track demos along with a reproduction of a show poster that looks to be hand-autographed by Greg Sage.

Wipers answered the question of their debut album’s title with an emphatic yes.