Album Review: The Hollywood Stars – Live on the Sunset Strip 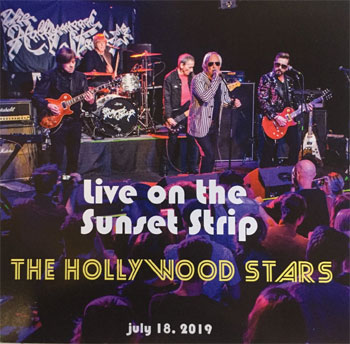 In the mid 1970s, The Hollywood Stars were charting a musical path not wholly unlike Sweet: super-catchy bubblegum-meets-glam rock. But they didn’t earn success commensurate with the quality of their material. Last year saw the release of Sound City, a “lost album” of the band’s best material from that era, and its success was met with live dates by a current lineup of the band, one that features most of the original members to boot.

That hometown show from July 2019 was documented on audio, and now the band has decided to release it on CD. As planned, Live on the Sunset Strip was slated for release on the Burger Records label, but (as you may or may not know) some very unsavory news about that label – none of which has the slightest connection to The Hollywood Stars, it should be emphasized – came to light, and the band severed its relationship with Burger within hours of that news breaking. (Burger collapsed a day or two later anyway.)

All of which is to say that release of Live on the Sunset Strip won’t be on Burger. The band’s site indicates that it’ll be out on October 31, apparently self-released. Happily for this reviewer, an advance copy found its way into my mailbox the day before the … uh, burger hit the fan. So let’s dig in.

It’s safe to assume that a sizable contingent of the crowd gathered for the show came to hear the “old stuff” as presented on Sound City. But you wouldn’t know it from the way the band opens the show. The Hollywood Stars audaciously launch into “King of the Night Time World,” a tune that’s best known in an inferior cover version by Kiss. On this night, The Hollywood Stars are on fire, playing the tune just loose enough to channel that Stonesy, New York Dolls vibe that characterized their ‘70s sound.

To underscore the influence they had upon others, the follow it up with a stomping, fist-pumping-in-the-air version of “Escape,” another original, one that was recorded by Alice Cooper on his solo debut Welcome to My Nightmare. Lead vocalist Scott Phares’ in-between-song comments are a bit muddled audio-wise, but the sonic clarity of the overall recording is fine.

Most of the remaining songs in the band’s set at the Whisky A Go Go are tunes found on Sound City, and the current-day band tears into them with assured rock-osity. Lead guitarist Chezz (or Chez) Monroe is the new member of the band, and he fits perfectly, avoiding the showy overplaying tendencies that far too often characterize new-guy-in-the-band players.

Nearly all of the songs are strong, but standout tracks include “All the Kids on the Street,” which really should have given Sweet some stiff competition back in the day. An interesting rocker is “Supermen Are Always Gentlemen,” first featured on another release billed as “lost”: Shine Like A Radio – The Great Lost 1974 Album. It was written by Mars Bonfire, best known as the composer of Steppenwolf’s “Born to Be Wild.” The song is less glam-leaning than the other songs in the band’s repertoire.

The only weak point in the set is – perhaps unsurprisingly – a ballad. There’s nothing especially wrong about “Modern Romance,” but it feels far too derivative of “A Whiter Shade of Pale” and “All the Young Dudes.” The vocal harmonies are undeniably great, and the heroic ‘70s style lead guitar break suggest that it worked fine live and in person.

But that tune’s an outlier. Elsewhere, Live on the Sunset Strip pretty much rocks out start to finish; in a perfect world, the band’s radio-ready tunes should have made a mark on the charts. But hey: we’ve got ‘em now, and that’s enough.