Crime and Spy Jazz on Screen: A Conversation with Derrick Bang (Part 1) 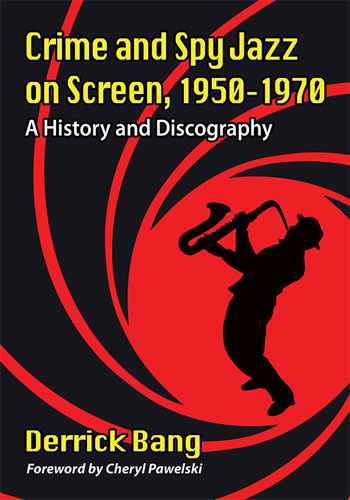 One of the many benefits of being a music journalist is that I come into contact with all manner of creative types. So it was that my friend Cheryl Pawelski of Omnivore Recordings introduced me to Derrick Bang. A film critic and author, Bang has written a two-volume work that digs deep into a subject near and dear to my own musical tastes. Crime and Spy Jazz on Screen, 1950-1970 and its companion volume covering 1971 to present day explore the ways in which evocative jazz has been used in motion pictures and television. (Cheryl wrote the foreword to the first volume.)

I was a precocious kid; in the late ‘60s I listened to a lot of music, and made a point of learning the names of the artists who made it. I had a similar appetite for TV action series like Mannix, Dan August, The Prisoner, Ironside and Secret Agent (aka Danger Man). Though I didn’t know it at the time, the cool music that helped propel their action scenes forward was often jazz.

Bang’s books bring his experience as film critic to bear in a conversational, lively and frequently humorous manner. He helpfully demystifies a number of characteristics of film/TV music. For example, I only learned when reading his books that there are actual terms to discern between the music that the characters can hear (diegetic) and the music that only we, the viewers can hear (non-diegetic). There’s other useful insider jargon as well: stinger, cue, mickey-mousing, but Derrick Bang’s writing style presents it all in a way that makes sense to the non-musician, the non-cineaste. Not only are his Crime and Spy Jazz on Screen books wonderful reads, but they’re destined to serve as essential reference guides. My copies now occupy precious space on my bookshelf, and I am sure I’ll refer to them often in the days, months and years to come.

As I read Bang’s books, I thought it would be useful to provide an audio companion to the transcript of our conversation. To that end, with a bit of assistance from me, he has kindly created two playlists that provide a wonderful overview of the subgenre of music with which his books deal. While a lot of the material is available, much of it has not seen official release. As such, the selections are split between a Spotify playlist (for the officially-available music) and a Youtube playlist documenting music that hasn’t made it onto vinyl or CD. If you have any interest at all in this music, you’ll want to hear both in their entirety. – bk

What led to your obviously deep interest in the relationship between film and film music?

Derrick Bang: To go way back, my father was a strong jazz aficionado, and he tried very hard to get his only son interested in such music. But I was a child who came of age in the ‘60s and couldn’t be bothered. But I was also a fan of James Bond films, and got very interested in John Barry’s music in those films. Although he moved more in the direction of symphonic texturing as his work on the series progressed, in those early films, what he produced was just great, awesome action jazz. And my father was very coy. For several years, he never used the “J word” [jazz], because he didn’t want to say something that might turn me around. But, ultimately, once I got old enough and savvy enough, he figured it was safe. And by that point, of course, the bug had been planted.

Another milestone – which I don’t mention in these books – was the arrival of the Peanuts gang on television in December 1965. Of course, that was our first exposure to Vince Guaraldi’s wonderful music for that special than the ones that followed, that I loved.

And so, by the time I hit college, I was paying very close attention to how music was used in film and on television. In fact, that was the sideways entrance I used to what became my long-standing career as a film critic. A lot of them do it because they just love movies, or they get annoyed with the critics in their local paper, or they’re enamored of directing or writing, or whatever. I kind of slipped in through a side door. Even in my early clumsy efforts at reviewing films, I would pay very close attention to the way the music was used to enhance or augment – or sometimes interfere – with the story that was being told.

The amount of research for this book must have been staggering. Have you any estimate at all of how many hours of film and television you screened in connection with this pair of books?

The first six months was pretty much exclusively assembling lists and gathering the data to figure out what I would be watching. And then the final six months – by which point I had done all the watching and observing – was editing. For sure, six, seven hours a day, at least six days out of seven, for four years. I lived and breathed this stuff for four years. And you know the cool part? I can honestly say that I’m not tired of it.

Notwithstanding the early television series that are lost to time, there are still quite a few series that aren’t readily available on DVD or other viewable formats. How did you gain access to that material?

Excellent question. YouTube has a lot more stuff that it shouldn’t have than you would think. Even some episodes of pretty obscure shows that have never seen the light of home release. And even beyond YouTube. A friend of mine who kept feeding me new options is very skilled in navigating, shall we say, the grayer areas of the internet. And he came across episodes from TV shows and movies that I never would have found otherwise. So, I was very lucky. There were only a couple of cases [where episodes were unavailable] – I mentioned them in the book – and most of them are 1960s and early ‘70s British TV shows because the BBC wiped so many of their tapes. 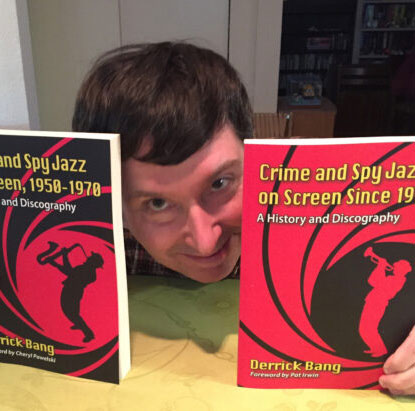 Yes. They did the same thing with their music archives!

Yeah, and that’s just hopeless. There were very few cases where I felt that I hadn’t been able to watch enough to legitimately discuss a show, and in some cases, I just discarded them. Since by definition, I was dealing with a series that was obscure to begin with, I figured nobody would notice.

Henry Mancini’s score for The Thief Who Came to Dinner. That’s an unusual album in that Mancini’s general habit – stretching back to Peter Gunn, and certainly in his early film work – was to completely re-record the cues, and in some cases meld two or three together in order to produce an album that was very radio friendly. It would not have been unusual in the early ‘60s to hear an isolated track from the Pink Panther score, or the Charade score, as opposed to just hearing the main theme, because he did such a good job of that. But The Thief Who Came to Dinner is almost entirely cues directly from the movie.

Mort Stevens’ LP for Hawaii Five-O is another terrific example; most of the album features music from actual episode recording sessions, rather than fresh arrangements of same. And it’s a kick-ass album.