There’s a moody — and sometimes even a little dark and melancholy — vibe to some of the music on Land of the Living. Would you say that there’s a kind of overarching emotional perspective to the album as a whole?

I would say that a lot of my solo work does tend to be pretty dark and moody, and I can’t seem to help it. Music has always been a therapeutic thing. Yeah, I don’t necessarily need therapy if I’m feeling good. I’m not writing a song if I’m skipping through the park.

But the other part is, in some ways I feel like I’m an empath. So possibly I kind of absorb a more global thing. I absorb other people’s feelings and express them. And sometimes I feel like I’m writing songs for other people. They’re not even for me or about me, but they are for other people, and they move through me. And I just try not to question that or stifle that; I just let it happen.

I do think it’s a moody album. I think I was processing a lot of deep stuff. And I tried to leave listeners on a positive note [with] “Land of the Living,” which is [about] choosing to grapple with your darkness and coming out the other end after bringing down the ghosts and fighting your demons. Coming out with a little less weight on your back.

Other than mastering, was this album completely done at home?

The one difference between this album and [2018’s] Navigate the Madness is that for this one I did record all the drums at Echo Mountain Recording studios with Julian Dreyer. I had one full day there and really wanted to get the drum sound [to] bring the whole album to a higher fidelity. And I’m thrilled with the tone of the drums on this album.

“Run with the Wolves” seems to me to draw from trip-hop and funk and soul. And “Middle of Life” reminds me of Massive Attack. Is trip-hop – you know, that sort of late 90s, early 2000s kind of dreamy, chill wave stuff – something that informs this album?

Sure, yeah. I love that you picked up on that. Honestly, I don’t have a great language to speak about what trip-hop is exactly, but I like artists like Moby. I love where you have a pretty tight, hard beat and then soft overlayings. So yes, that does inform it.

It seems like with this album, you’re allowing the wider palette of things that have influenced you to manifest themselves through your original material than you’ve done before. 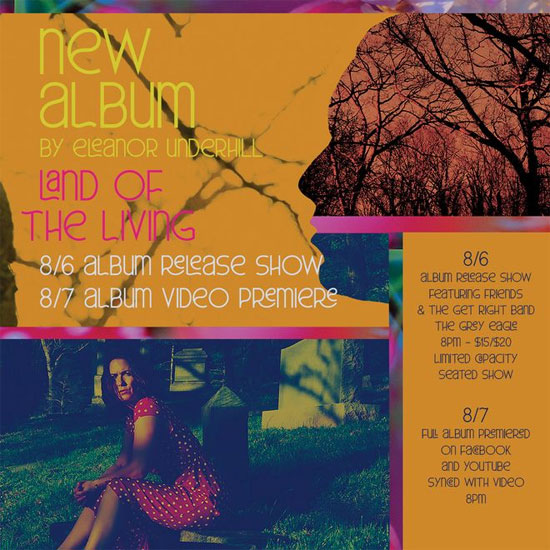 Not to overly focus on marketing and branding, but I would think that for at least a subsection of your fan base – well, certainly for at least some Underhill Rose fans, for example – they wouldn’t know what to do with this album. I can almost hear them going, “Mellotron? Saxophones? Sitar and fretless bass?!?” Are you finding that you’re having to market yourself all over again to a different audience with this record?

Yeah, that was a concern about halfway in. I’m like, “What am I doing here?” This is exactly what you’re not supposed to do if you’re trying to succeed in the music business. I had to make a decision. Not to be overly dramatic, but at the end of my life, what am I going to be proud of? And I was like, “Well, fuck it. I’m just gonna go for it, and if people don’t like it, they can wait for the next Underhill Rose album.” But yes, I did have to make my peace with losing some fans, potentially.

But I think there’s a lot here for a whole new batch of hopefully new fans. We shall see.

Are there any sort of guiding principles that you adhere to when you’re writing music?

I think the guiding principle that comes to mind right now is, “Don’t let the editor into the room until they’re needed.” And by that, I mean my inner editor. You don’t want to punish the muse for coming through and showing up. You know, even if it’s a bunch of crap, let it happen. Try and capture it; try and respect it. And that will nurture that relationship with the muse. I sound a little bit like a crazy person, I realize.

No. Quite honestly, that’s the same approach that I take: Just sit down and start writing. You can always edit it later. If you’ve got the ideas in your head, get them down. You can sharpen, amplify, condense, whatever you want to do afterwards. Just get it down, because you don’t know if a couple hours from now the muse may have split.

When the album comes out officially, what formats will it be in?

I wish so much I could say vinyl right now, but with COVID and financial stuff, that ship sailed. So, for now, it will be physical out on CDs and then all the digital streaming platforms.

Notwithstanding the reality that everything everywhere is pretty much on hold – and we just don’t know what’s going to happen next – what are your thoughts about eventual touring in support of this album?

I don’t know that I have any plans to tour this album. It is something that I hope I can push into the streaming world really, and the syncing world. I see several TV shows or commercials and I’m like, “Oh, ‘Run with the Wolves’ would be perfect for that!” So that’s where I’m trying to make ends meet, make a living as a musician.

I love performing, but I’m still a bit burnt out on touring from doing it for so long with Underhill Rose. For now, it’s just a pleasure to be able to create something I’m really proud of.