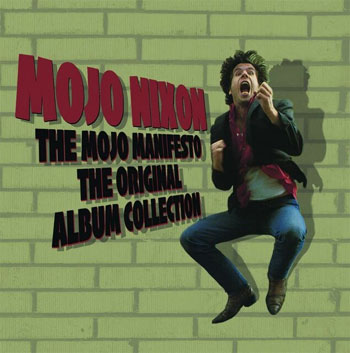 Years ago while watching some or other “madcap” comedy film, I came to a realization: drama is comparatively easy, but comedy is difficult. It’s a fairly straightforward affair to tug at a viewer’s heartstrings; it’s quite another matter entirely to make them laugh.

The same is true in music; writing a weepy ballad –not to say an especially good one – is not a great challenge. But crafting lyrics that will bring the listener to laughter is a much more daunting proposition. And doing it in a way that rewards multiple listens is even more of a challenge.

But that has been the chosen creative path for Mojo Nixon. Starting in 1985 and continuing through the end of the 20th century, he released a steady stream of albums that showcased his wickedly irreverent brand of humor. Six of those (and an EP) paired him with instrumentalist Skid Roper, four found him backed by his group The Toadliquors, and one (Otis) was a “solo” album featuring guests like Roscoe Ambel, Dick Montana and John Doe. All of those (plus Nixon’s final solo release before retiring from music, 2009’s Whiskey Rebellion) have been brought together in a new boxed set, The Mojo Manifesto: The Original Album Collection.

It’s a fair question whether anyone needs a tidy box containing all of Nixon’s material. Without a doubt, he did provide some of pop music’s funniest moments with songs like “Elvis is Everywhere,” “Debbie Gibson is Pregnant With My Two-Headed Love Child” and “Don Henley Must Die.” Whether his topical rave-ups have resonance today is an open question. It’s a safe bet that anyone who wasn’t around at the time of its release might be perplexed to hear Nixon sing the eternal couplet, “I ain’t gonna piss in no cup / unless Nancy Reagan drinks it up.” It was transgressively hilarious enough in 1987, but context is everything, and pop culture touchstones have changed a thousand times over since 1987.

Still, the rip-roaring music is fun, a kind of snapshot of one man’s irreverent take on the MTV era. And with that in mind, the boxed set provides one of its two wonderful bonus items: a seven-track DVD, Mojo Nixon Video Collection, with videos for some (but not all) of his best-remembered tunes.

The other bonus item is a substantial booklet. With full annotation and credits for each of the albums therein, the booklet also features essays for each of the discs. And rather than assign the liner note essay gig to a single writer, Manifesto has taken a more creative route, enlisting the talents of a variety of writers including Doe, Robert Gordon, Ambel and others. The booklet is jam-packed with photos and memorabilia as well.

The wrangling that must have been required to bring these reissues together – they came out on a variety of labels including IRS and Enigma – displays the sort of dedication one might expect to find directed toward a, shall we say, more mainstream (or at least well-known) artist. But for those Mojo Nixon fans who simply must have it all, The Mojo Manifesto is just the ticket. Will it sell? That’s anybody’s guess. If it does, Nixon – who these days is a Sirius XM deejay/host – might just ask the musical question he posed on 1986’s Frenzy: “Where’s my money?”