Album Review: The Harmed Brothers — Across the Waves 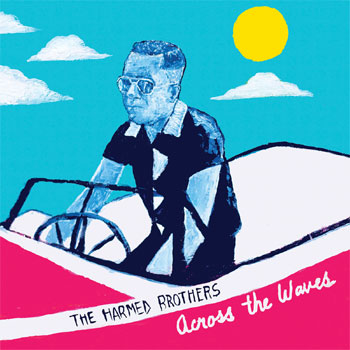 Though it’s billed as rock/Americana, The Harmed Brothers’ fifth album Across the Waves is better described as heartland rock. There’s twang in the music to be sure, but the earnest and soulful presentation of these songs is truer to the rock ‘n’ roll spirit. “Skyline Over” benefits from a tight, concise and memorable melody, and it’s representative of the album as a whole. Alex Salcido and Ray Vietti (the “brothers”) trade lead vocals depending on the song, but both of them posesse a lived-in, world-weary vocal style that is perfectly suited to the material.

Fans of the Silos, Long Ryders, Green on Red and like-minded ‘8os practitioners of the country-influenced side of what we then called college rock will find Across the Waves warmly familiar. The guitar solos are delightfully lengthy (check out “Picture Show”), expanding on the melodic lines but never turning showy or indulgent. And most every song seems to end before it has a chance to overstay its welcome.

“Funnies” has a Southern vibe that suggests The Band. And with its keening pedal steel guitar and subtle banjo picking, the melancholy “River Town” does finally bend the album toward classic country. The uncluttered arrangements are occasionally adorned with organ and electric piano (as on “Born a Rotten Egg”), but the instrumentation always serves the songs, providing an inviting and sympathetic backdrop for the word pictures of the Harmed Brothers’ lyrics.

The haunted vibe of “Where You’re Going” weds a traditional country instrumental arrangement to some otherworldly and unsettling guitar textures. Placed near the album’s end, the chiming “All the Same” shows that the Harmed Brothers are confident enough to not front-load the most appealing tracks. And “Ride it Out” sounds like a less psychedelically-inclined Rain Parade.

The album closes with the lengthy “Time,” a tracks that is in no hurry to get going. Easily the most subtle tune of the entire set, it’s still completely at home among the more energetic songs. And the occasional squalls of faraway guitar that punctuate the arrangement add just the right touch. Across the Waves doesn’t as much end as it does fade to black. But it will leave listeners ready for a repeat spin.