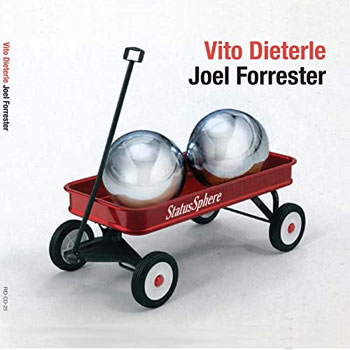 Jazz fans are likely to pick up on the in-joke of this album’s cover art immediately. It’s a visual homage to the 1957 LP Monk’s Music. And the two round objects in the wagon are a nod to Thelonious Monk’s nickname, “Sphere.” StatusSphere is, then, a fitting name for a Monk tribute. Vito Dieterle plays tenor sax, and Joel Forrester takes on the daunting task of playing piano in a Monk style on this disc featuring a dozen duets. Forrester’s playing is deft and lyrical, but lacking in the idiosyncratic approach that defined Monk’s own approach to the keyboard. Of course that’s an unfair if inevitable comparison.

Rather than simply tackle a collection of Monk classics, Dieterle and Forrester give over just more than half of the set to Monk compositions. So we get the expected tunes like “Work,” “Ba-Lu-Bolivar Ba-Lues Are” and “Ruby My Dear” (and not one but two readings of “Crepuscle with Nellie”). But the disc also features five Forrester originals, written and played in a style that complements the Monk material.

In his brief liner note essay Forrester remarks upon Monk’s “involved detachment.” That phrase applies to the unspoken communication between the two musicians on this recording as well. They clearly get the spirit of Thelonious Monk, and they channel it admirably.