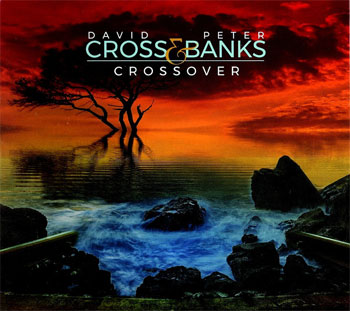 David Cross came to fame as member of King Crimson during the band’s first run of incarnations; he played violin on Larks Tongues in Aspic and Starless and Bible Black. Peter Banks was the original guitarist in Yes. Both musicians continued to work after their most high-profile turns, often drawing on assistance from their former band mates. They teamed up to play and record a set of improvisations in 2010.

But unlike the knotty, sometimes intimidating music of King Crimson, the product of their collaboration is a suite of accessible, surprisingly melodic pieces. The basic tracks cut in 2010 would be enhanced by additional contributions form Crimson drummers Pat Mastelotto and Jeremy Stacey, plus keyboard work from former Yes keyboardist Oliver Wakeman (and yes, his dad was in Yes as well) and current keyboardist Geoff Downes.

The tunes move through sections that feel impressionistic, but those bits are balanced by tuneful, catchy passages. There’ a jazz fusion feel to “Upshift,” a track featuring guest turn from original Yes keyboardist Tony Kaye and the omnipresent (in a good way) bassist Billy Sherwood.

While there’s energy and finesse on display, the tunes float by effortlessly; the absence of vocals means that Crossover works well as background music. “The Smile Frequency” heads a bit toward world-ambient textures, while the cinematic “The Work Within” is grandiose and imposing in scale and nature. “Missing Time” is a saturnine mood piece. “Plasma Drive” starts out similarly but works its way into a prog groove as it winds onward.

Taken as a whole, Crossover is a subdued collection, but it’s enjoyable nonetheless. One has to listen closely for guitar pyrotechnics, but they do surface from time to time, most notably on the otherwise placid “Laughing Strange.” Banks’s guitar is placed low in the mix, though, so as not to overly jangle the nerves of the listener who came to chill.

The dissonant, multilayered and somewhat unsettling “Crossover” closes the collection; it’s almost completely made of Cross’ violin work, with some atmospheric keyboard parts underpinning it.

While not the highlight of either musician’s body of work, Crossover remains a worthwhile listen, and is recommended for listeners who appreciate the ambient – and dare I say new age – end of the progressive musical spectrum.