Before the (Family) Stone Age: The Viscaynes (Part Three) 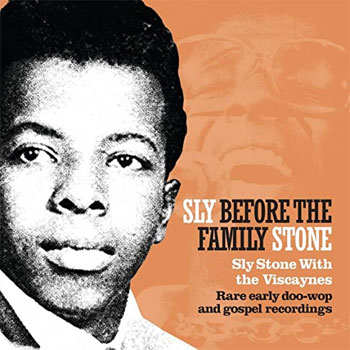 One afternoon soon thereafter, Chuck Gebhardt found himself mowing the very same lawn. “Next thing I knew, a limo pulled up, and my mom got out,” he recalls. “Come on; we’ve got to go to Los Angeles,” she told him. Gebhardt hesitated; he was only halfway done with the grass cutting. “I can’t just leave!”

“You’ve already quit,” his mother told him. “It’s all taken care of.” He got in the car, and the limo took the family to the airport in San Francisco, where they boarded a plane – “the first plane trip in my life,” Gebhardt adds – to LAX. Once in Los Angeles, the group made its second recording of a Sly Stewart original. “We first recorded ‘Yellow Moon’ at a studio in the Bay Area,” Gebhardt recalls. “But I guess they didn’t like it very much.”

“Yellow Moon” features a slightly odd-sounding lead vocal from Sly Stewart. “I don’t know why,” Gebhardt says, “but what they did was speed it up just a little bit. So instead of Sly with his nice deep voice, it has a little different twist.” The b-side of “Yellow Moon” would be another Stewart original, “Heavenly Angel.” Neither the a-side nor the flip was credited to Stewart, though; the composers are listed respectively as George Motola (the session’s producer) and Earl Washington, both also co-credited to Rickie Page, Motola’s wife.

A third song, “Uncle Sam Needs You,” was also cut; it was released as a single as well, with “Yellow Moon” on its b-side. “We did quite a few songs,” Gebhardt recalls. “We were there for a week.” On its release, “Yellow Moon” became a minor hit on the West Coast.

Even though they were all still in their teens, the members of The Viscaynes could appreciate the talent within Sly Stewart. But even they didn’t realize just how deep of a creative well lay within the young musician; the work he did with The Viscaynes only hinted at that potential. He wasn’t at all involved in the production side of things with the group, Gebhardt says. “I don’t think that they knew he had that ability at all.”

Various online sources assert that The Viscaynes backed Richard Berry – famous for “Louie, Louie” – on a session credited to Jasper Woods. That song, “Hully Gully Papa,” was released on VPM Records, the same label that put out “Yellow Moon.” But Gebhardt’s memory contradicts that story. “I don’t remember doing [recordings] with anybody but us,” he says. “It’d be neat if I could say, ‘Yeah, that’s right.’ But I’d rather have the truth out there.”

Those same sources suggest that The Viscaynes had already broken up by the time “Yellow Moon” began to get airplay. “That’s weird,” says Gebhardt. “Because we hadn’t broken up until Frank went into the Air Force and Sly was doing more stuff with Tom Donahue and Autumn Records.” He says that the group didn’t formally decide to disband; it was more a matter of its members drifting in different directions. “Sly was being taken to San Francisco and being catered to down there,” he says. “And it was almost like we were finished with what was going on.”

Gebhardt says that Sly did his best to make opportunities for his friends from the Viscaynes. “He kept trying to bring us back into [musical projects]; he was loyal, and we were family.” Nothing significant came of those efforts, though, and the group members all went on to other things.

But even after the Viscaynes were over, the former members still hung out together on occasion. Gebhardt recalls one night when several of them (including Sly Stewart) visited San Francisco’s Condor Club to take in a performance by the famous topless dancer Carol Doda. Gebhardt recalls that as soon as the show was over, Sly told his friends, “Come on; let’s go say hi to her!”

As they approached the dressing room door, a club employee shouted at them. “You can’t go in there yet; she’s not dressed!” Gebhardt recalls laughing and saying to Sly, “We just saw her on top of a piano and without any clothes on, and now we’ve got to wait here in the hallway!”

Once Sly found greater success with The Family Stone, he invited his former band mates to visit his parents’ home, one he had recently bought for them. “They took us into the house and showed us all around,” Gebhardt recalls. “His mom said, ‘You’ve got to come in and see, Charlie.’”

Neither Charlie Gebhardt nor any of the other Viscaynes have seen nor heard from Sly Stone in many years. But Gebhardt still thinks highly of his former band mate. “He’s like a nomad now,” Charlie says. “And it’s a shame. Because he could actually be doing something [music-related] right now. And [even] if he wasn’t singing the music, he could be putting music together for somebody else to sing. Because I bet he’s got a million songs.”

Though their time in the spotlight was brief, Gebhardt has nothing but fond memories of The Viscaynes. “It gives you some memories,” he says. “The experience was unbelievable. You got to be a rock and roll star. And that’s something that none of us, I don’t think, would ever trade.”