Before the (Family) Stone Age: The Viscaynes (Part One) 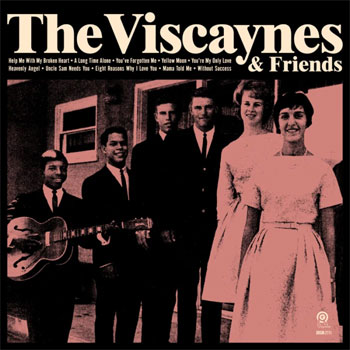 The music and career of Sly Stone and his group The Family Stone is well known. What’s less explored is his earliest work, recordings made when he was still Sly Stewart, a teenager in Vallejo, California. Those original singles are now impossibly rare, though various tunes have surfaced on compilations over the years. But now two new releases – on different labels, unrelated to one another – are compiling music from that early chapter of Stone’s history.

From ORG Music comes The Viscaynes & Friends, a ten-track vinyl LP featuring the seven best (and best-known) sides from Stone’s first pop group, alongside three related tracks. And a CD release, Sly Before the Family Stone features 19 cuts. Some of those feature The Viscaynes as well, and there’s no overlap with the ORG record; Sly Stone completists will want both. And they’ll want to know the back story of the Viscaynes; for that it’s best to turn to Charles “Chuck” Gebhardt, one of the group’s singers.

A coterie of music-minded students at Vallejo High School in the San Francisco Bay area got together in 1961 as a group. Billing themselves as the Viscounts (pronounced VIE-counts) they worked up arrangements of popular vocal group tunes. Vocalist Chuck Gebhardt and his brother Vern were among the members of the group. He admits that when the Viscounts began, they had “not a lot” of musical training or expertise. “Just a lot of singing in back rooms, living rooms, bathrooms … a lot of it at my house on Highland Street in Vallejo,” he says. “Wherever we could do it, really.”

The group’s members had come together through shared interests. All were members of Vallejo High School’s choir, and several took part in stage plays. “We were also in talent shows,” Gebhardt says, which could be an intimidating prospect. “Because Vallejo High School sounded like Motown all the time,” he says. “Everybody had a lot of talent. We felt very lucky that we got to do what we did.”

The Viscounts name didn’t last long. After a New Jersey pop group with the same name scored a Billboard Hot 100 hit (#52) with a cover of Earle Hagen’s “Harlem Nocturne,” Gebhardt says that “we were advised to change our name.” The group members spent an entire evening trying to come up with a suitable one.

In some ways, being forced to change their name was a blessing for the young group. “Everybody got it all confused,” admits Gebhardt. “Is it ‘vis-counts,’ or ‘vie-counts?’” But they didn’t want to re-brand in a way that might lose them whatever momentum they had already established. “If we kept the ‘V’, people could still associate us with the Viscounts,” Gebhardt recalls thinking. So they settled on a variant of their original name: The Viscaynes. “We thought, ‘There’s a Chevrolet called the Biscayne. If we change one letter, they’ll think that’s cool. And maybe they’ll give us a car,’” he says with a chuckle. “It never happened,” he deadpans. “We never heard from Chevrolet.”

Another classmate, Sylvester “Sly” Stewart – later known as Sly Stone – almost didn’t join the group. Raised in a very religious household, he was forbidden to play music outside of his home or at the Church of God in Christ. “His mom and dad were very strict when it came to his performing,” Gebhardt says. “They were great people – sweethearts, really – but music outside the church was a touchy thing.” Sly was already busy as a longtime member of a family gospel group, The Stewart Four, featuring himself plus siblings Rose, Vaetta and Freddie. That ensemble had cut a record, “On the Battlefield” b/w “Walking in Jesus’ Name” back in 1952.

But Sly really wanted to join the Viscaynes as well. “He had to make his parents a promise to get his grades up, and they finally – reluctantly – let him come over to our group,” Gebhardt says. The Viscaynes had been auditioning for a singer to replace a departing member. But when Sly showed up, “it wasn’t even close,” Gebhardt says. He was in. And in addition to being a fine singer, “Sly could play any instrument you could lay out on a gymnasium floor,” he says. “It didn’t matter if it had a couple of broken strings; he could still make music with it. The guy was – and is – a musical genius.”

For live performances, the Viscaynes would often be backed by one of several local bands. They often played with The Continentals, a band that featured saxophonist Jerry Martini. He and Stewart became good friends, and would later spend nearly a decade together in Sly and the Family Stone.

Most of the Viscaynes’ repertoire consisted of cover tunes. Gebhardt says that the group chose material that lent itself to adding vocal harmonies. “With the band behind us, we’d rehearse and develop the music. We’d try to make it a little different than the originators of the songs themselves.”

The group got a break of sorts when performing a song popularized by Thurston Harris, “Little Bitty Pretty One.” The Viscaynes took to the stage at a talent contest. “Halfway through the song, the judge, Pete Marino said, ‘Okay, you’re in,’” Gebhardt proudly recalls. “For some reason, we had this sound that just flowed together, with two girls and the rest of us guys. It just blended.”

All members of the group contributed to developing the song arrangements. “Frank Arellano would do some, and [the rest of us] would throw little bits and pieces in,” Gebhardt says. “We’d either like it or not like it. We would sit around and jam.” Sometimes during those vocal arranging sessions, a piano player would join in. Eventually pianist Mike Stevens was added to the lineup.

“We would add little nuances into the songs, so they became a little more ‘ours,’” Gebhardt says. But the Viscaynes didn’t leave the original versions too far behind. “Because we weren’t quite good enough,” he admits. “Creativity is something you have to have. Our choir director was able to help us out, and then when Sly came into the group, we started to have even more of that.”

The Viscaynes were a fairly democratic group, one without an appointed leader. But Sly Stewart’s talents meant that he often took a leading role. “He would make sure that our pitches were right,” Gebhardt says. “He could hear that right away.” He recalls one vocal practice. “Sly said, ‘Do you guys all want to be leads, or do you want to actually have some harmony? I think we’ll do some harmony; how does that sound?’”