Album Review: Råttanson — I’d Much Rather Be With the Noise 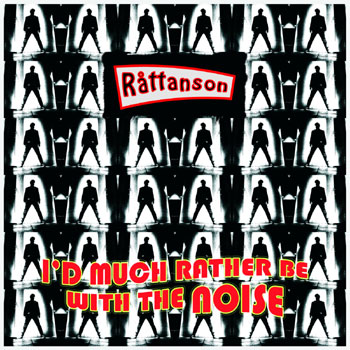 Nervy, high-octane powerpop is the chosen style for Råttanson, a one-man project from just outside Stockholm. If you’ve discovered the remarkably consistent output from Swedish bands working in the powerpop idiom, you’re likely pre-sold on something like this. Good on you; you won’t come away disappointed. But even those who may not yet have turned on to the joys of current-day Swedish rock ‘n’ roll are likely to be won over by this fine set. Titled I’d Much Rather Be With the Noise, this collection of fourteen songs grabs listeners by the ears right from the start and never lets go.

The nasally-voiced Råttanson (he’s one of those mononym types, you see) plays everything but the drums, but – more importantly – he crafts sharp hooks, and his songs don’t beat about the bush; each gets right to the heart of what makes powerpop (at its best) so exhilarating. Occasionally the songs have a retro feel: “Rathole Guest” has some whooping backing vocals that evoke memories of the rolling Stones’ “Sympathy for the Devil, and the arrangement features a kind of Bo Diddley beat at its core. But mostly, the songs on this album are straight-ahead pop-rockers.

“Kiss This Year Goodbye” feels like the best tunes from The Records, and it would sound right at home on a second volume of Children of Nuggets. Råttanson is just as effective when he slows the tempo a bit, as on “No Best of Me,” a gentle rocker with hints of Merseybeat. Yet while he occasionally changes up the instrumental mix – nostalgic combo organ textures on “Dancing on the Head of Snakes” and “Want You Around,” banjo on “Sure of My Doubts” for example – there is a subtle sameness that creeps its way into the songs here.

Still, the quality is uniformly high, so that isn’t a serious criticism, but the music on I’d Much Rather Be With the Noise might best be enjoyed in the context of a larger playlist that includes other artists – might I suggest fellow Scandinavian rockers Arvidson & Butterflies, ANC4, The Greek Theatre and The Amazing – set on shuffle play.