Home  »  classical • interview   »   The Ragazzi Boys Chorus in Pandemic Era: Alone Yet Together

The Ragazzi Boys Chorus in Pandemic Era: Alone Yet Together

In the midst of the Covid-19 pandemic, top first priorities should be health and safety, and taking care of basic needs. But once those items are addressed, maintaining some semblance of normalcy is important as well. Grammy Award winning Ragazzi Boys Chorus has made great creative strides in that regard: while group rehearsals are out of the question for now, the organization is putting technology to work so that many of the 251 students in the program can continue their studies.

In typical times, class instruction focusing on music theory is followed by 90 minutes of group chorus rehearsal, explains Kent Jue, Executive Director of the Redwood City-based Chorus. “That’s all about [students] making music together, and improving their own personal musicianship and vocal development in a group setting,” he says. 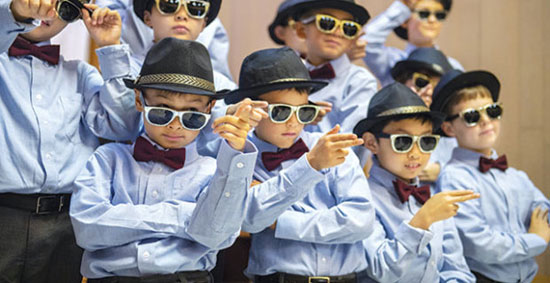 But with shelter-in-place rules in effect, those group activities aren’t possible. So the team of instructors at Ragazzi Boys Chorus decided to pivot, setting up a new instruction and rehearsal regimen via the internet. The new program was deployed in only three days. “A large majority of our boys have enough access to utilize the platforms,” Jue says. “Most of our work right now is done via our website; they can access our remote learning plans.”

Jue and other instructors are in the process of contacting all of the kids in the Chorus. “It’s less about compliance, about ‘Are you doing the assignments?’” he emphasizes. “We just want to make sure that they’re okay.” And he concedes that the concept of remote instruction can be challenging for some.

The organization is doing what it can to make the remote instruction as accessible and effective as possible. The first step was to create and record accompaniment and part-learning tracks, “so that the kids can access them and learn and review their music at home on their own,” Jue explains. Each student can then make audio or audiovisual recordings of himself singing along with those tracks, sending them back to his instructor for feedback.

Ragazzi Boys Chorus has ten ensembles in all, with seven instructors. Jue has 30 boys in his ensemble, and the response to this new learning model has exceeded his expectations. “I’ve listened to 132 different recordings that they’ve sent back,” he says. “And I’m thrilled by that.”

Most of the online interaction has been one-on-one, between instructor and student. But Ragazzi has organized an online group activity as well. That didn’t work well for educational purposes, but Jue doesn’t mind. “For building community, I think it did a very nice job,” he says.

Putting accompaniment tracks online is not new, Jue admits. “It has been on my mind; it just hadn’t been as much of a priority as it is now.” But the benefits have become readily apparent. “In many ways, this is an opportunity that [our students] wouldn’t normally get,” he says. “Kids who thrive on individual attention are really thriving in this new model, because they’re basically getting individual voice coaching lessons.”

The kids who are drawn to technology are seeing this as an opportunity to showcase some of their strengths, Jue says. He believes that the individual instruction helps cultivate students’ “emotional empathy and its expression to a live audience.”

Born of necessity, this new approach may well influence how the Ragazzi Boys Chorus does things in the post-pandemic era. “I think that we’re going to continue to offer the online learning portal,” Jue says. Coupled with group practices, remote learning will create an even more well-rounded experience for the students.

May concert appearances have already been canceled, and other dates – including the Chorus’ summer camp program scheduled to begin in July – are in doubt. But Jue and his colleagues at Ragazzi Boys Chorus are still looking toward the future. “If we could get back today, for example, we could create a concert within three weeks,” Jue says. “Because the music is already ingrained in them.” And he’s proud of his organization’s response to difficult times. “Our families have stuck by us and are engaged with our work,” he says. “And we’re doing the best that we can to continue our learning with our boys.”

An edited version of this feature appeared previously in Metro Silicon Valley.