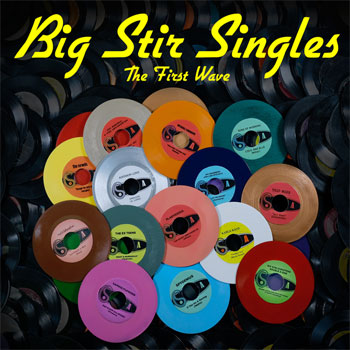 Back in the days when it still actually played music videos, MTV put together a promo clip featuring David Bowie. The Thin White Duke smiled rakishly at the camera and intoned, “Too much is never enough.” And to make sure viewers got the point, Billy Idol, Cyndi Lauper and The Police told them the same. Some four decades later, Burbank, California indie label Big Stir Records is putting that philosophy into practice with its Digital Singles Series. As label heads Christine Bulbenko and Rex Broome explain on the label’s web site, the series is “an ongoing diary of the very best of the global pop rock scene.”

And it’s clearly a big scene. As of this writing, Big Stir has released nearly 60 singles in the series, which only started in Fall 2018. And when I say “singles,” I’m using the term in its original definition: a- and b-sides. So we’re talking about nearly 120 songs (117 to be exact). And for those (like this writer) who greatly prefer their music on physical media as opposed to getting it via downloads or streams, Big Stir Records has helpfully compiled its Digital Singles Series on to five – count ’em: five – long-playing compact discs. Titled Big Stir Singles: The First Wave (and …Second… and on), each disc is jam-packed with goodies that sort of take the pulse of the pop-rock music world.

The label does a fine job of showcasing a wide swath of artists. You will recognize some of the names, highly-regarded artists in the world of powerpop and other tuneful rock subgenres. Texas rocker Lannie Flowers pops (so to speak) up on the fourth and fifth volumes. Karla Kane of The Corner Laughers, Agony Aunts and her own delightful solo career) is represented. Even Big Stir honchos Bulbenko and Broome (aka The Armoires) have some well-earned spots.

The presence of other names, while a notch less familiar, are harbingers of quality even before the shrink wrap comes off: Amoeba Teen, The Morning Line, Jim Basnight and David Brookings & the Average Lookings have all been part of the Digital Singles Series and are compiled here. 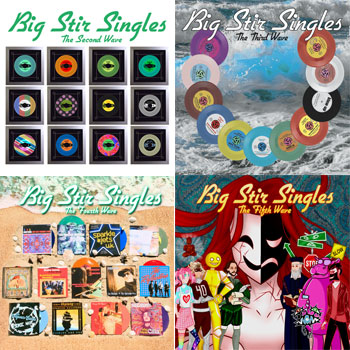 And the CDs are put together in a way that front-loads them with their strongest tracks: the a-sides all play through , followed by the (virtual) flips. There are plenty of original songs throughout the series, but covers play a significant role as well. The six or so hours of music on these five discs features a Big Star cover, “The Ballad of El Goodo” by sparkle*jets UK (they also take on the almost-Big-Star of Chris Bell’s “You and Your Sister”). Other covers include The Velvet Underground’s “What Goes On” by Blow-Up, the Kinks’ “Tired of Waiting for You” (Brookings), The Goffin/King girl-group classic “Chains (PopDudes), “Goodguy Sun” by Martin Newell (Kane) and several others. Nearly all of the tracks are studio recordings, but there are occasional live cuts.

I’ve intentionally avoided noting which song is on which volume, because I encourage those interested to – in the parlance of another slogan from even farther back than the MTV era – “collect ’em all, kids!”