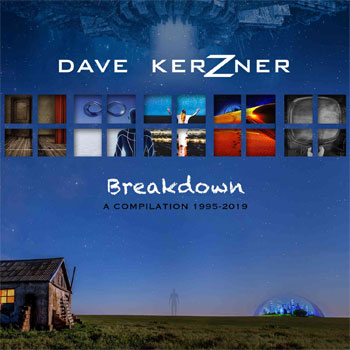 I’ve come across Kerzner’s music before; he made a quite-good Yes tribute with frequent collaborator Fernando Perdomo, and I reviewed his concept album Static just over two years ago. This new 2CD set, however, will be the best entry point for those new to the man’s work. A survey of his work to date, Breakdown draws from eight previously-released albums release under his name or with the band In Continuum.

All of the hallmarks of Kerzner’s work are shown to their best effect here; his influences are readily apparent, yet most of the time he manages to channel them into something that ultimately has how own stamp on it. Kerzner’s music seems as informed by, say, Boston or Thin Lizzy (think: twin lead gutars) as Genesis or more progressive-minded artists. The disc focuses as much on balladry as on uptempo tracks; its strength lies at least part within that variety. And his strong vocals set him apart from the pack of prolific studio rats.

And when Kerzner is shamelessly derivative, he own it: his liner notes readily admit that “Nothing” is inspired by ELO. The tracks sounds like a Jeff Lynne outtake, right down to the windup-toy vibe of the drums. It sounds as much like try-to-create the ELO sound project as an actual song, but as long as one accepts it for what it is, it’s solid. A live reading of “Static” sounds a great deal like RPWL, which is never a bad thing.

As a whole, Breakdown showcases the accessible, only-a-little-prog side of Dave Kernzer. In practice that means that while there are prog flourishes and values, the overall emphasis is on melody. The collection doesn’t always rock; it focuses more on sweeping, grand arrangements that move at midtempo; putting his music closer to the Moody Blues and Pink Floyd side of things.

But the prog vibe does show up now and then. Though “Reckless” starts off as a solo acoustic piece, it eventually unfolds to reveal an ambitions piece that stands up well next to current-day progressive groups like Spock’s Beard (who, I should mention, this cut reminds me of a great deal).

Kerzner has quite a Rolodex. The list of musicians who are heardo n this collection is long and impressive. Among the most familiar names are frequent collaborators Perdomo and the McBroom sisters Durga and Lorelei (of Gilmour-era Pink Floyd), superdrummer Marco Minnemann, former Spock’s Beard drummer Nick D’Virgilio, Steve Hackett, Francis Dunnery and Dave Kilminster. Breakdown is recommended to fans of any and all of those like-minded artists, and to anyone who enjoys the more tuneful side of progressive rock, and/or the more prog side of accessible rock.