Prepare Yourself: Porcupine Tree’s ‘The Sky Moves Sideways’ at 25 (Part 2) 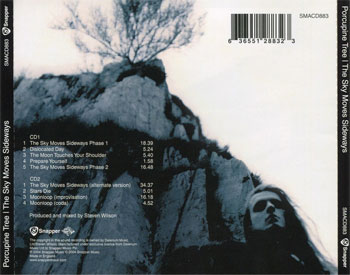 The nature of the music on The Sky Moves Sideways gives bassist Colin Edwin comparatively little to do as well: while he’s an instrumentalist of the first order, there’s often not a great deal in Wilson’s compositions here that lends itself to low-end fireworks. While that would change significantly on future Porcupine Tree albums, on Sideways Edwin simply does his job extremely well.

“The Moon Touches Your Shoulder” finds a melancholy Wilson singing in a whisper while evoking an English folk vibe. As the song unfolds, other instruments enter, and the arrangement becomes even more deeply textured. His solo is a thing of beauty: bluesy but certainly not blues. In the song’s final moments, the band tears the roof off – with Maitland laying down an insistent beat – capped off by an riff that is far catchier than one would expect of an odd time-signature piece. Said riff could easily go on for an extended period, but to Wilson’s credit – he’s as good an editor as he is at most anything else to which he puts his mind – he cuts it short.

“Prepare Yourself” is a brief guitar solo laid atop a spare backing, but it’s a tidy linking instrumental that brings the listener to the second extended piece, “The Sky Moves Sideways Phase 2.” Opening with more of a soundscape than music, it inevitably invites comparisons to “Shine On You Crazy Diamond.” But once again, Porcupine Tree is its own thing: the nearly 17-minute piece contains within it some of the group’s most memorable work. The section subtitled “Is…Not” features some great soloing and dreamy, wordless vocals from Suzanne J. Barbieri. Wilson plays multiple guitars; the song is almost a showcase of his different textures, but – again to his immense credit – the different styles fit together seamlessly.

As “The Sky Moves Sideways Phase 2” winds toward its conclusion, some of the earlier instrumental themes are reprised, And Wilson takes another opportunity – several opportunities, actually – to peel off some soaring solos. Admittedly, as often as not, those solos may remind some listeners of David Gilmour, but Wilson also executes some more distinctively dissonant corkscrew playing, the likes of which would have never surfaced on a Pink Floyd record.

The final minute of The Sky Moves Sideways features some watery sounds that evoke more than a passing reminder of 1987’s A Momentary Lapse of Reason, the debut release from the David Gilmour-led era Pink Floyd.

The Sky Moves Sideways appeared in different versions – different song sequence and track divisions – for its U.S. and UK releases. One of the best Porcupine Tree cuts of all time, “Stars Die” was not included on the British release; it’s a highlight of the U.S. record, and indeed of the band’s entire catalog. Like the two albums before (and two after) it, The Sky Moves Sideways didn’t chart, but in the wake of Porcupine Tree’s belated success, the album would be reissued in an extended form. The second disc featured a single-track alternate version of the title number, “Stars Die” and a 20 minute improvisation called “Moonloop,” a track that showed Porcupine Tree to be as effective a jam band as anyone.

Though thankfully that’s not a direction they would pursue: as interesting as Metanoia, 1998’s album of improv pieces is, Wilson has all but disowned it. “As far as I’m concerned, there’s already some stuff out there which I would consider to be very peripheral, which I would rather was not out. Metanoia is one,” Wilson told me in 2011.

After The Sky Moves Sideways, Porcupine Tree would return in less than two years with another record, Signify. A more band-focused release, it would feature greater creative input from Edwin, Barbieri and Maitland.

In retrospect, The Sky Moves Sideways can be viewed as Steven Wilson’s last “solo” work prior to 2009’s Insurgentes. But there’s an equally compelling argument to be made that his fingerprints are indelible whether the project is released under his name, one of many side-project labels (cf. Bass Communion, Storm Corrosion etc.) or Porcupine Tree.

“Every time you make a new record, you run the risk of basically losing your existing fan base and not necessarily regenerating a new one,” Wilson told me in a 2019 interview. But if that’s the gamble he’s taking, the trajectory of his career – from Porcupine Tree to present day – suggests that he’s winning.