On a Spring afternoon in 1975, Swiss keyboard virtuoso Patrick Moraz found himself bounding through a field in upstate New York, carrying with him a synthesizer. Accompanying him on this unlikely outdoor jaunt was the electronics pioneer Dr. Robert A. Moog. 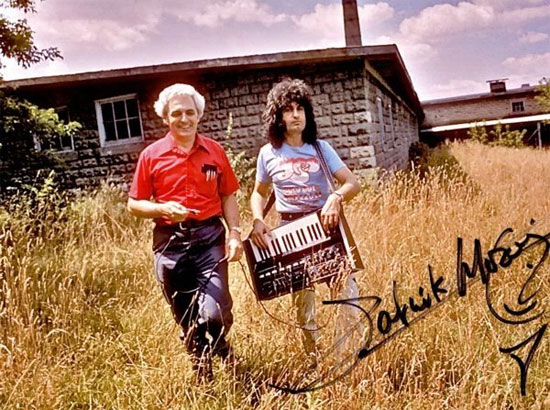 “We used to have field trips around his laboratory in Buffalo,” explains Moraz. “And then one day, we decided to go and take some pictures with the Micromoog for his publicity and promotion.” The model 2090 Micromoog was just one of the latest innovations from Bob Moog and his team. The single oscillator monophonic, monotimbral synthesizer had just debuted, with a suggested list price of $695. Adjusted for inflation, that works out to about £2600 today, but in the ’70s the Micromoog still represented a low-cost alternative to the mighty Minimoog, which retailed for twice the price.

Moraz’s visit to New York marked the first time the two had met. “I was with Yes at the time; that trip was before the second Relayer tour, just at the end of May. I stayed in Buffalo with my very good friend, Jean Ristori, who took the picture. He also took the [band] photo that is on the inside of Relayer.”

During his visit, Moraz was immediately struck by Moog’s demeanor. “There are only a few geniuses over the history of mankind,” he says. “But Bob was always very humble, extremely interested in the dialogue and the demands of the artist. And he was so open to suggestions.”

The pair went on a few other excursions with the Micromoog. “We went to Niagara Falls,” Moraz recalls. “But we wanted to go to the Canadian side, because it would make a better picture.” They were stopped by Canadian Customs officials, wary of the strange device Moraz was carrying. “We had to explain that,” Moraz says with a laugh, noting that the unit he and Moog brought along was in truth a non-working model, lacking all of the internal components. That way it was lighter to carry on the location photo shoot.

Moraz encourages a closer look at the “field trip” photo. “I don’t know if you’ve noticed,” he says, “but Bob had a kind of cable that he’s holding, like I would be on a leash with the Micromoog! He wanted to make sure that people understood that I was so attached to his instrument, whether it was the Micromoog, the Minomoog or – in the very, very near future – the Polymoog.”

While in Buffalo, Moraz spent a good amount of time at Moog’s lab and workshop. “I was amazed at how a little place like that could create such wonderful and amazing instruments,” he says. “It was almost like a finely-tuned garage, but with all kinds of parts that I had never really seen before.” Moraz had a good bit of technical background himself, having done consulting work. “I used to check some planes for some companies in Turkey,” he says, without getting into details.

“But I was amazed at how diverse all of the pieces were, and how Bob’s assistants assembled them,” Moraz says. “It was an amazing, amazing journey. He introduced me to all of his fellow workers. He showed me so many things, and I was absolutely convinced, especially with the Polymoog!”

The Polymoog represented another great leap forward from the mind of Moog. Up to that point, analog synthesizers were limited, at least in one sense. Musicians could only play one note at a time; in practical terms, that helped explain in part why other synth players – like Rick Wakeman, Moraz’s predecessor in Yes – had so many keyboards onstage. But the Polymoog was a fully polyphonic instrument that also featured a bank of preset sounds.

Moraz would explore the capabilities of the Polymoog on his solo debut album, 1976’s The Story of I. And Bob Moog would be a key figure in the creation of that album.

“We had decided that all members of Yes would each create one solo album,” Moraz explains. Work on The Story of I began in Rio de Janeiro, Brazil, where Moraz assembled a group of percussionists. “Sixteen of them,” Moraz says, still beaming with pride at the resulting recordings. “In three days in Rio, I recorded the [percussion tracks for] The Story of I.”

Returning home, he aimed to continue work on the album. But he enlisted some help. “I was able to invite Bob Moog and his [first] wife, Shirleigh, to Geneva, Switzerland for three weeks. And he helped me with the Polymoog during recording.”

The musician and the inventor got on exceedingly well. “I composed most of the music on the spot there,” Moraz says. “I remember that for the opening sequence called ‘Impact,’ I was explaining to Bob what I was hearing [in my head] as sounds. I had tested the Polymoog in Buffalo earlier on, but I didn’t know really exactly how to use it in its best capacity.”

Moog helped make those sounds in Moraz’s head into reality. “The curtain in the jungle opening, and the rawwwr, he helped me create the possibility of doing those sounds,” the keyboardist says. “I was explaining how I would like these electronic movements and their frequencies, and Bob was able to help me create those [sounds] that I was explaining.” Moraz characterizes their working relationship as having “an extraordinary feeling of sonic empathy. Bob Moog was so unbelievably calm as well; we could really, really communicate together at the highest order of information transfer.”

Even though The Story of I is nominally a “solo” album, Moraz gives massive credit to Moog. “Of course, Bob did not play any of the instruments,” he says. “And even if he didn’t stay for the four months it was recorded, the spirit of Bob Moog’s creativity absolutely reigns over the whole work.”

Patrick Moraz has many fond memories of his time spent with Bob Moog. “He was always very creative, and he was always also open to the merging of the spirits,” Moraz says. “Bob’s legacy is universal.” But it’s down to earth as well, a fact underscored by that photo of his field trip with his new friend.